From EverybodyWiki Bios & Wiki
Jump to:navigation, search
The correct title of this article is #1Lib1Ref. The omission of the # is due to technical restrictions. 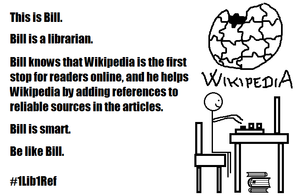 A Be like Bill meme relating to the campaign

#1Lib1Ref is a Wikipedia campaign inviting every librarian on Earth to participate in the online encyclopedia project, specifically improving articles by adding citations.

The first #1Lib1Ref campaign coincided with the 15th anniversary of the founding of Wikipedia in January 2016.[1][2][3] Based on the premise of One Librarian, One Reference, organizers estimated that if each librarian on the planet spent 15 minutes adding a citation, the combined effort would eliminate English Wikipedia's backlog of 350,000 [citation needed] notices.[4] The inaugural, weeklong event ran from 15–23 January 2016, and employed the hashtag #1lib1ref on various social media platforms.[5]

Results of the first campaign[edit]

The inaugural campaign ended with 1,232 revisions on 879 pages, by 327 users in 9 languages, using the hashtag #1lib1ref in the edit summary; these numbers likely underestimate the overall impact, since many participants were observed omitting the hashtag from edit summaries. On Twitter the #1lib1ref hashtag was used in over 1,100 posts by over 630 users.[6]

The campaign has been revived as an annual celebration of Wikipedia's birthday,[7] expanding into a three-week event in subsequent years.[8] The 1Lib1Ref campaign is part of the Wikimedia Foundation's GLAM outreach strategy to involve librarians in the improvement of Wikipedia.[9]

This article "1Lib1Ref" is from Wikipedia. The list of its authors can be seen in its historical and/or the page Edithistory:1Lib1Ref. Articles copied from Draft Namespace on Wikipedia could be seen on the Draft Namespace of Wikipedia and not main one.

Share
Retrieved from "https://en.everybodywiki.com/index.php?title=1Lib1Ref&oldid=1369081"
Categories:
Hidden categories:
This page was last edited on 13 February 2021, at 01:02.
Content is available under License CC BY-SA 3.0 unless otherwise noted.
This page has been accessed 542 times.
Privacy policy
About EverybodyWiki Bios & Wiki
Disclaimers