The 2021 Wimbledon Championships is a planned Grand Slam tennis tournament that is scheduled to take place at the All England Lawn Tennis and Croquet Club in Wimbledon, London, United Kingdom. Novak Djokovic and Simona Halep are the defending champions in the single competitions.

Following the cancellation of the 2020 tournament due to the COVID-19 pandemic, the main tournament is due to begin on Monday 28 June 2021 and finish on Sunday 11 July 2021. The 2021 Championships will be the 127th staging of the Ladies’ Singles Championship event,[1] the 53rd in the Open Era and the third Grand Slam tournament of the year. It is to be played on grass courts and is part of the ATP World Tour, the WTA Tour, the ITF Junior tour and the NEC Tour. The tournament is organised by All England Lawn Tennis Club and International Tennis Federation. 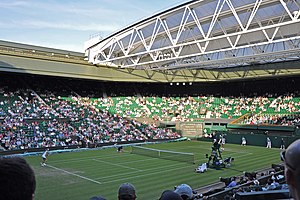 Centre Court, where the finals of Wimbledon will take place.

The 2021 Wimbledon Championships will be the 134th edition of the tournament and will be held at All England Lawn Tennis and Croquet Club in London.

The gentlemen's seedings formula used since 2002, it will not be used and instead players would use the standard seeding system based from their regular ATP Rankings.[3]

Below is the tables with the point distribution for each phase of the tournament.

Share
Retrieved from "https://en.everybodywiki.com/index.php?title=2021_Wimbledon_Championships&oldid=910818"
Categories:
Hidden categories:
This page was last edited on 1 August 2020, at 07:21.
This page has been accessed 1,448 times.
Content is available under License CC BY-SA 3.0 unless otherwise noted.
Privacy policy
About EverybodyWiki Bios & Wiki
Disclaimers
Dark mode