Eighty-six or 86 is American English slang used to indicate: that an item is no longer available, traditionally from a food or drinks establishment; or referring to a person or people who are not welcome in the premises. Its origins are unknown but seem to have been coined in the 1920s or 1930s.

The term is now more generally used to get rid of someone or something. In the 1970s its meaning expanded to refer to murder. 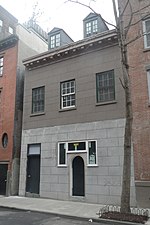 Chumley's at 86 Bedford Street in the West Village

Eighty-six was initially used in restaurants and bars according to most late twentieth-century American slang dictionaries.[1] It is often used in food and drink services to indicate that an item is no longer available or that a customer should be ejected.[1] Beyond this context, it is generally used with the meaning to 'get rid of' someone or something.[1]

According to the online Merriam-Webster dictionary, 86 means to "refuse to serve (a customer)", to "get rid of" or "throw out" someone or something.[2]

According to the Oxford English Dictionary, it may be used as a noun or verb.[3] As a noun, "In restaurants and bars, an expression indicating that the supply of an item is exhausted, or that a customer is not to be served; also, a customer to be refused service. Also transferred."[3] As a transitive verb derived from the noun, it means "to eject or debar (a person) from premises; to reject or abandon".[3] The OED gives examples of usage from 1933 to 1981.[3] For example, from The Candidate, "in which the media adviser said to Robert Redford, ‘O.K., now, for starters, we got to cut your hair and eighty-six the sideburns'"[3]

According to Cassell's Dictionary of Slang, the meaning expanded in the U.S. during the 1970s to also mean “to kill, to murder; to execute judicially”.[4] This usage was derived from the slang term used in restaurants.[5] Other slang dictionaries confirm this definition.[6][7][5]

There are many theories about the origin of the term but none are certain. It seems to have originated in the 1920s or 1930s. Possible origins include:

This article "86 (term)" is from Wikipedia. The list of its authors can be seen in its historical and/or the page Edithistory:86 (term). Articles copied from Draft Namespace on Wikipedia could be seen on the Draft Namespace of Wikipedia and not main one.

Retrieved from "https://en.everybodywiki.com/index.php?title=86_(term)&oldid=1070456"
Categories:
Hidden categories:
This page was last edited on 25 October 2020, at 20:33.
This page has been accessed 99 times.
Content is available under License CC BY-SA 3.0 unless otherwise noted.
Privacy policy
About EverybodyWiki Bios & Wiki
Disclaimers