Dr. Abdulaziz Ibrahim Al Rajhi الدكتور / عبدالعزيز بن إبراهيم الراجحي is an active Saudi ophthalmologist, with a main focus on the prevention of blindness within the Eastern Mediterranean and African region.
He is currently the President of the Middle East African Council of Ophthalmology (MEACO).[1] 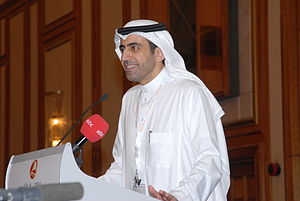 Dr. AlRajhi presenting during MEACO 2009 in the Prevention of Blindness session

Retrieved from "https://en.everybodywiki.com/index.php?title=Abdulaziz_Al_Rajhi&oldid=1804720"
Category:
Hidden categories:
This page was last edited on 27 March 2015, at 18:39.
This page has been accessed 71 times.
Content is available under License CC BY-SA 3.0 unless otherwise noted.
Privacy policy
About EverybodyWiki Bios & Wiki
Disclaimers