Abdullah Yahia Yousf Al Shabli (عبدالله يحيى يوسف الشبلي) is a citizen of Saudi Arabia held in extrajudicial detention in the United States Guantanamo Bay detainment camps, in Cuba.[1] The Department of Defense reports that he was born on September 10, 1977, in Jeddah, Saudi Arabia. His Guantanamo Internment Serial Number is 240.

As of September 15, 2010, Abdullah Yahia Yousf al Shabli has been held at Guantanamo for eight years seven months.[2]

Originally the Bush Presidency asserted that captives apprehended in the "war on terror" were not covered by the Geneva Conventions, and could be held indefinitely, without charge, and without an open and transparent review of the justifications for their detention.[3] In 2004 the United States Supreme Court ruled, in Rasul v. Bush, that Guantanamo captives were entitled to being informed of the allegations justifying their detention, and were entitled to try to refute them.

Office for the Administrative Review of Detained Enemy Combatants[edit] 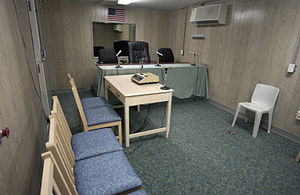 Combatant Status Review Tribunals were held in a 3x5 meter trailer where the captive sat with his hands and feet shackled to a bolt in the floor.[4][5]

Following the Supreme Court's ruling the Department of Defense set up the Office for the Administrative Review of Detained Enemy Combatants.[3][6]

Scholars at the Brookings Institution, lead by Benjamin Wittes, listed the captives still held in Guantanamo in December 2008, according to whether their detention was justified by certain common allegations:[7]

Retrieved from "https://en.everybodywiki.com/index.php?title=Abdullah_Yahia_Yousf_Al_Shabli&oldid=849013"
Categories:
Hidden categories:
This page was last edited on 14 July 2020, at 08:26.
This page has been accessed 319 times.
Content is available under License CC BY-SA 3.0 unless otherwise noted.
Privacy policy
About EverybodyWiki Bios & Wiki
Disclaimers
Mobile view