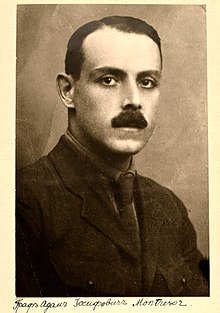 Count Adam Josepovich Montrézor (Ukrainian: Адам Йосипович Монтрезор; (*1888 — ?) — Ukrainian politician of the conservative wing. Leading figure in the Neo-Hetman Movement, founder of the Hetman organizations of Poland, one of the founders of the Ukrainian Union of State-Owned Growers.

The man is the eldest daughter of Hetman Ukraine Pavlo Skoropadskyi — Maria.

He came from an ancient Polonized French family, whose ancestor traveled to the Commonwealth in the XVIII century. Mother — Constance Vatslavivna came from the Lyubovids family.

Count Adam Montrézor was a close friend of Ukrainian conservative thinker Vyacheslav Lypynsky, a neighbor of his estates in the Uman region. Montrézor belonged to the French aristocratic family, whose representative was forced to flee to Poland from the persecution of Cardinal Richelieu in 1627..[1].

During the military campaign of Napoleon in Russia, the great-grandfather of Adam Montrézor, part of the French army, participated in hostilities. In the end, the genus Montresorians settled in the Ukrainian Podillya. From the end of the XIX century, representatives of the family took an active part in the Ukrainian national movement.

Having been one of the founders of the USSR, Count Adam Montrézor in the beginning of 1921 was incorporated into the Board of Jurors. Since 1930, he has been an active member of the UWCS in Warsaw.

Vyacheslav Lypynsky in his letters described Montrézor as a person «sincerely devoted to the Ukrainian national-national idea». In 1939, during the occupation of Polish territory by the German army, Adam Montrézor disappeared. According to rumors, murdered by red special services of the USSR in Volhynia. All searches, organized by Hetman Skoropadskyi and his daughter, proved to be in vain. The future of Adam Montrézor is unknown [2]

Others articles of the Topics Ukraine AND Biography : Andrii Ivanovych Klantsa

Retrieved from "https://en.everybodywiki.com/index.php?title=Adam_Montrézor&oldid=850010"
Categories:
Hidden categories:
This page was last edited on 14 July 2020, at 15:18.
This page has been accessed 334 times.
Content is available under License CC BY-SA 3.0 unless otherwise noted.
Privacy policy
About EverybodyWiki Bios & Wiki
Disclaimers