Afric Aviation SARL was a regional airline based in Port Gentil, Gabon. All flights were suspended in May 2017, due to financial difficulties.[1]

On August 5 2015, the company's co-founder and CEO Alfred-Pierre Etouké was sentenced to 3 months of jail time for embezzlement. The verdict coming after a series of lawsuits between Étouké and co-founder Alain Regourd.[2]

Despite the large number of passengers carried, the airline fell to a financial crisis hitting Gabon, which lead to some of its clients defaulting on loans. This financial pressure coincided with the grounding of the airline's only airplane due to technical faults, as well as the unexpected termination of its leasing contract.[4] The airline suspended flights due to these financial difficulties. While the suspension was supposed to last only 6 months, the airline was never recertified.[5]

The Afric Aviation fleet consisted of one aircraft at the time of its operations being suspended. [5] 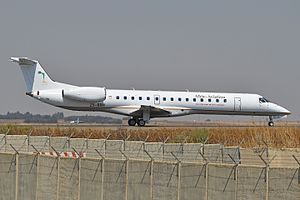 An Embraer 145 in Afric Aviation livery, in September 2014, after landing at Johannesburg