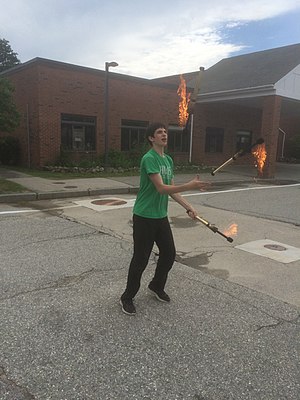 Alexander (Alex) James Marin was born on June 6, 2001, in Detroit, Michigan. He lived in Plymouth, Michigan until he moved to Camden, Maine at the age of five. He started playing the organ at the age of nine after an encounter with the organist at the First Congressional Church of Camden, Maine. He has won numerous organ scholarships from organizations including the Young Organist Collaborative of Exeter, New Hampshire (2014-2016) and the Young Organ Initiative of Boston chapter of the American Guild of Organist(2018-2019)[1]. Alex has attended 3 High schools; High Mowing School in Wilton, New Hampshire where he attended during his freshman year in 2015-16. Alex spent his sophomore year at Camden Hills Regional High School in 2016-17. Alex has spent his Junior year (2017-18) and senior year (2018-19) at Lincoln Academy where he plans to graduate on June 6, 2019. 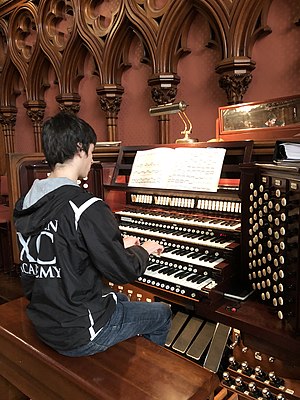 Alex played the Fiddler in Fiddler on the Roof, the title character, at High Mowing School his sophomore year (2015-16)

He has performed in 3 One-act plays by Molière: The Flying Doctor, The Jealous Husband, and Two Precious Maidens Ridiculed

Alex has played The Muleteer Juan and a Knight in Lincoln Academy's production of Man of La Mancha in fall 2018.[2]

Alex has been playing the organ since the age of nine. He currently is using his Organ scholarships to study under Christian Lane.

Alex sings in Lincoln Academy's elite choir group, the Lincolnaires. Alex also sings in Tapestry Singers an adult community choir in the Newcastle, Maine area. Alex has participated in the Maine District 3 Two-Day Honors Chorus Festival in both 2014 and 2019.

Alex went to a two week composer camp with composer and music editor Jon Deak at the age of 10, and composed an original piece, Opus I, that was performed by the Brentano String Quartet.

Alex learned how to juggle in the sixth grade, but it wasn't until his early high school years that he pursued his talent and performed with Circus Maine and The Flying Gravity Circus in 2015 and 2016.