The Alexander ALX400 (later known as the TransBus ALX400 and the Alexander Dennis ALX400) is a 2-axle double-decker bus body built by Walter Alexander Coachbuilders (later by TransBus International/Alexander Dennis). It was one of the ALX-series bodywork, all of which (except the ALX100) featured the same designs on the front and rear panels that were originally designed for the new generation of mainly low-floor bus chassis produced since the late 1990s. 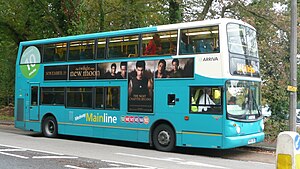 Various seating configurations were available, with Transport for London (TfL) specification models fitted with a central exit door. There are typically 45 seats on the upper deck, and between 17 (on the DAF DB250) and 22 seats on the lower deck. Longer models for use elsewhere have up to 47 seats on the upper deck, and 24 below with a central door. Stagecoach subsidiaries outside London have ALX400s on long-wheelbase Dennis Trident 2 chassis, fitted with 51 seats upstairs (47 on later models) and 28 downstairs. These buses have been used all over the UK, in major cities including London, Birmingham, Manchester and Newcastle.

Released in 1997, it replaced the Alexander R-series and was fitted to numerous chassis, including the Dennis/TransBus Trident,[1] the DAF/VDL DB250LF[3] and the Volvo B7TL.[2] It proved to be a big success with national operators; large numbers of the buses served London and the rest of the United Kingdom. From its introduction until 2006, it was the favoured 2-axle double-decker bus model for the Stagecoach Group.

The ALX400 was also popular with Dublin Bus of Ireland, which ordered 658 between 2000 and 2006. 648 of them were fitted on Volvo B7TL chassis, AV 1-448 (AV means Alexander Volvo) were Volvo B7TL chassis,[2] and AX 449-648 were on B7TL MKII chassis. During 2003 an order was placed for 10 TransBus Trident/ALX 400 versions known as DT 1-10 to compare against the AV class with a view to splitting future orders. Most of these featured 76 seat single door bodies although there were various seating capacities for on a small minority used and rail/airport services. Summerhill based AV 116-130 were built with dual door bodies for use on the Airlink services.

In late 2005 Alexander Dennis launched the Enviro400, intended as a replacement for the ALX400. But in 2006, new ALX400s were still entering service with Stagecoach (on Dennis Trident 2 chassis) and Arriva (on Volvo B7TL chassis). Despite the bulk of the 2006 Stagecoach double-decker bus order favouring the Enviro400 model, also chosen by London operator Metroline, in March 2006 Dublin Bus placed a repeat order for 100 of the type on Volvo B7TL chassis. Production of the ALX400 bodywork ceased after the delivery of these 100 ALX400-bodied Volvo B7TL in late 2006.

Retrieved from "https://en.everybodywiki.com/index.php?title=Alexander_ALX400&oldid=1228632"
Categories:
Hidden categories:
This page was last edited on 10 January 2021, at 02:04.
This page has been accessed 156 times.
Content is available under License CC BY-SA 3.0 unless otherwise noted.
Privacy policy
About EverybodyWiki Bios & Wiki
Disclaimers