Angel Toledano Flores (born 7 January 1990), is a Spanish football coach who most recently was an Assistant Coach in Tianjin Tianhai FC.

Born in Belalcázar, in the province of Córdoba, southern Spain, he completed his bachelor's degree in Physical Activity and Sport Sciences from the University of Extremadura (2008-2013). Between 2010-2011, he participated in the Erasmus student exchange programme and attended the University of Central Lancashire.

Between 2015-2019, Toledano completed the necessary studies to obtain the coaching badge from UEFA A License provided by the Spanish Football Federation. 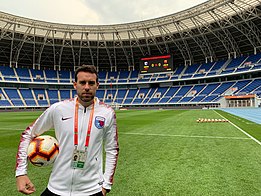 Retrieved from "https://en.everybodywiki.com/index.php?title=Angel_Toledano_Flores&oldid=857387"
Categories:
This page was last edited on 16 July 2020, at 23:10.
This page has been accessed 347 times.
Content is available under License CC BY-SA 3.0 unless otherwise noted.
Privacy policy
About EverybodyWiki Bios & Wiki
Disclaimers
Mobile view