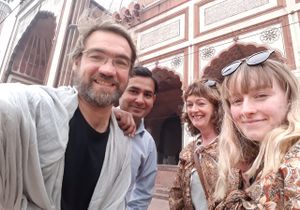 In the prime age, Saleem Khan worked daily 12 hours labour as a paper scrap loader in Sugar Mills at Daurala for earning money and foods because at the main time he had no money, foods and any good denims to survive himself. It was very hard time when Saleem while loading scraps in trucks he found a little bit piece of glass article in his right eye because of this he soon lost his job and his owner soon discovered he's unable to be on work. Saleem graduated to intermediate school in 2004 and passed his second grade in year 2006. Then he went to his college degree for bachelor's of Arts in year 2007 and passed his graduation 2010. He done his M.A English ( Hons.) from CCSU and again pursued his dual Master's with history. So he does possess dual MASTERS' from CCSU. He did one and half year diploma in computer operating and functioning systems in New Delhi then for around three years he continued to be for his teaching classes at Howard's counsel at Meerut and New Delhi. He also went for Delhi university for his higher education degree as Tourism of India and pursued two years diploma in very subjects. In year 2016 completed his education and then looked a better job in government services sector and then finally he found a job but soon left on his own interest then he again received a letter from American Official Embassy and then he joined for a foreign American tourists guide at Incredible India in New Delhi. As his last year degree, he's also well intrested in law and pursuing his L.L.B and wish to do apprentice in Law of Legislation. National Saleem Khan is an International English Blogger on Google Search Engine. He's very prominent teacher on Social media and internet sites.

Academic Qualifications - He's done his Master's in history and English literature from CCSU, Meerut. He currently holds two recognized Masters' (Hons.) in English and History. He also pursues his Job as an American, French Tourists guide In New Delhi as his English passion since 2009. He's much passionate about chasing his dreams and future plans. Saleem is a former Voice and American Accent Trainer, having an experience of 12 years working with British & American International BPOs and 13 years’ for training people on American English Grammar & Spoken English. He’s the author of Best preferred English learning blog called "Saleem Khan Anmol" on Google sites. He is also a social activist with reputed NGOs since 15 years.

In August 4th 2016, Saleem Khan was falsely accused of molesting his live-in relationship girlfriend with the help of her two Seniors advocates for attempting and fabricating charges to malice his social status and personal reputation. The Molesting Legal case is still on trials in Ghaziabad Session Court. Mr DS Yadav, (a high- ranked prominent advocate in Session Court), Amit Chaudhary and Mahipal Singh from Ghaziabad are fighting legal fight for Saleem to regain his reputation and human right since 2016.

Saleem Khan has got  a vast network of social media in which he got popularity around his local public. Saleem Khan Anmol also shot to fame in December 25, 2018 when he saved a young boy,with the help of police, from the custody of some bad guys who kidnapped the rich boy in dense jungles.

Saleem Khan is a volunteer for 'A Hope For Animals (AHFA)'.

Retrieved from "https://en.everybodywiki.com/index.php?title=Apna_Saleem_Bhaiya&oldid=819757"
Hidden categories:
This page was last edited on 19 June 2020, at 13:45.
This page has been accessed 116 times.
Content is available under License CC BY-SA 3.0 unless otherwise noted.
Privacy policy
About EverybodyWiki Bios & Wiki
Disclaimers
Mobile view