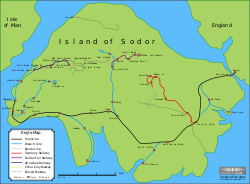 A map of the Island of Sodor showing the railway system – the Arlesdale Railway is shown in dark blue, on the left hand side of the map.
‹ The template below (Arlesdale Railway RDT) is being considered for deletion. See templates for discussion to help reach a consensus. ›

The Arlesdale Railway (more commonly known as The Small Railway) is a fictional minimum gauge railway on the Island of Sodor. It appeared in five books in The Railway Series by the Rev. W. Awdry and Christopher Awdry, and it appeared on the Thomas & Friends TV programme, first in the 2015 Thomas & Friends feature film special Sodor's Legend of the Lost Treasure and later appeared in Seasons 20 and 21, as well as The Great Race and Journey Beyond Sodor. The railway also makes a stock footage appearance in Season 22.

The railway is based on the Ravenglass and Eskdale Railway in Cumbria.

The railway's controller is Mr. Fergus Duncan, a dedicated man known as the Small Controller. This nickname is a joke, as he is a very tall man, and also a reference to The Fat Controller (Sir Topham Hatt) and The Thin Controller from the other Railway stories.

All of the locomotives on the Arlesdale Railway are based on real locomotives at the Ravenglass and Eskdale Railway. The three original engines of the Arlesdale Railway – Rex, Bert and Mike –  were brought to Sodor from an unspecified railway in England which closed in 1967. Each is identified by nameplates mounted each side of its smokebox (in the case of Frank, its hood and Jock, its boiler) and 'Arlesdale' written on its tender sides.

Rex is a green engine on the Arlesdale Railway who enjoys nothing more than teasing Mike. He is a hard worker, but sometimes has problems with traction.

After his old line in England closed down in 1967, he, Mike and Bert were bought by Sir Topham Hatt and the consortium that owned the Arlesdale Railway. He and his two companions were placed on mining and tourist traffic. After the railway secured a deal to transport wool to Arlesburgh, Rex was chosen to pull the first train, but after a negligent farmer spilt some wool bales on the rails he was derailed. His train was rescued, but Rex had to remain there until the end of the same day until being lifted out.

Rex is based on the Ravenglass and Eskdale Railway's "River Esk", built in 1923 in Colchester by Davey, Paxman and Co.

He made his debut in Sodor's Legend of the Lost Treasure and has appeared in every season since, except seasons 22 and 23. He also had a small singing role in The Great Race and cameoed in Journey Beyond Sodor.

Bert is blue, he is smaller but older than Mike and Rex, and also the quietest of the first Sodor engines. For a long time he had trouble with steaming, but he has been rebuilt with a taller chimney and cab which mean that he no longer suffers from shortness of breath. This modification has not appeared in the book illustrations, but is mentioned in "The Island of Sodor: Its People, History and Railways".

Bert is based on the Ravenglass and Eskdale Railway's "River Irt", rebuilt from a Heywood locomotive first built for Duffield Bank, Derbyshire, in 1894. He is painted blue with red stripes.

He made his TV debut in Sodor's Legend of the Lost Treasure, and has appeared in every season since season, except seasons 22 and 23. He also had a small singing role in The Great Race and cameoed in Journey Beyond Sodor.

Mike is a strong red engine who prefers goods trains to passengers. His temper matches his paint, as he can often be hot-headed. He is proud of his shrill whistle, which he once lost trying to shoo a cow. He arrived at the station along with Rex and Bert in 1967 after their line in England was closed down.

Mike is based on the Ravenglass and Eskdale Railway's River Mite, owned by the R&ERPS and built in 1966 by Clarkson's. He is painted red with blue stripes.

He made his TV debut in Sodor's Legend of the Lost Treasure, and has appeared in every season since, except seasons 22 and 23. He also had a small singing role in The Great Race and cameoed in Journey Beyond Sodor.

Jock is the newest steam engine on the Arlesdale Railway, and also the strongest. He was almost entirely built at the Arlesdale Railway's works. He was first mentioned in "The Island of Sodor: Its People, History and Railways", but made his first proper appearance in the eponymous book "Jock the New Engine". Jock was very cocky when he was first built, but soon learned the value of teamwork. His name comes from the fact that he is painted to resemble the locomotives of the Highland Railway in Scotland – a yellow-green colour with red lining. The name was suggested by Douglas, who remembered the Highland Railway from his youth.

Jock is based on the Ravenglass and Eskdale Railway's Northern Rock, built at Ravenglass in 1976.

Frank is a light-grey diesel, with a tendency to be grumpy. He sometimes loses his temper, which once caused him to crash into the back wall of the engine shed. Despite this, he is a hard worker and is sometimes called upon to rescue fellow engines who have broken down.

Frank is based on the Ravenglass and Eskdale Railway's "Perkins", which was constructed in 1984 at Ravenglass, a rebuild of a 1929 Muir-Hill tractor. He is light grey with a red stripe.

Blister I and Blister II[edit]

Blister I and Blister II are small twin diesels that were only mentioned in "The Island of Sodor: Its People, History and Railways". Not much is known about them, apart from the fact they have regular engine troubles and are particularly difficult to start - which is how they got their names. This is based on the trouble experienced with the Muir-Hill Fordson granite tractors that worked at Ravenglass with stone traffic until 1953.[citation needed]

Both are painted black with black and yellow stripes around their faces. Both are based on the Ravenglass and Eskdale Railway's Lister diesel "Cyril".

She has also been seen on the Ravenglass and Eskdale Railway: her real-life counterpart, Shelagh of Eskdale, has been dressed-up with a face to represent her at Day out with Thomas events, whereas formerly they named her "BoCoBo", after the locomotive's wheel arrangement.

Sigrid of Arlesdale is named after the Sudrian heroine of the same name, who lived in the Dark Ages and helped sack the invading Normans.

The railway has a number of passenger carriages for tourist traffic. The original coaches, which were a mixture of open (roofless) and "semi-open" (roofed, but doorless) types, were obtained from the same railway in England as the locomotives. The semi-open coaches have since been replaced with closed saloon carriages built at Arlesburgh Works. All the coaches are painted a deep pink colour.

For ballast traffic, the railway has a fleet of smooth-running bogie hopper wagons. These can be unloaded, via a "chute" (ballast hopper) near Arlesburgh West station, into waiting (standard gauge) trucks on the Fat Controller's Railway. The hopper wagons and unloading chute are based on similar designs once used on the Ravenglass & Eskdale Railway, who have provided much co-operation to the line.

In the television series the railway owns two kinds of wagons: the ballast hoppers and scaled down 7-plank open wagons for carrying wool. The railway also has several open-topped carriages.

‹ The template below (Arlesdale Railway RDT) is being considered for deletion. See templates for discussion to help reach a consensus. ›

The railway runs from Arlesburgh, east along the valley of the River Arle, to Arlesdale.

Most of the line follows part of the route of the historic, defunct, Mid Sodor Railway (Generally known as Duke's old line); however, at Arlesdale Green it leaves this route and takes a new, southerly course to Arlesdale.

There are two stations at Arlesburgh: Arlesburgh West, and Arelsburgh Bridge Street. Arlesburgh is based on Ravenglass on the Ravenglass and Eskdale Railway.

Arlesburgh West (also known as Arlesburgh Junction) is the western terminus of the railway. It is an interchange station with The Little Western (Duck's branch line), which connects southwards towards Tidmouth,[1] and – in Thomas and Friends only, from Sodor's Legend of the Lost Treasure onwards – northwards to Harwick as well. To the north-east of the station, there is a ballast hopper over the standard gauge line, which loads ballast into standard-gauge waggons,[2] and further on there are sheds and works.

Around 2 miles (3.2 km) from Arlesburgh West, the railway reaches Arlesburgh Bridge Street.[1] This is more central to the town of Arlesburgh than the interchange station is, but is a more minor station due to the quantity of tourist traffic that the railway receives from the main line.

Ffarquar Road is around 4.8 miles (7.7 km) from Arlesburgh West. It serves a small hamlet, of the same name as the station, where the road to Ffarquar reaches the road between Arlesburgh and Arlesdale.[1] It is based on Irton Road station on the Ravenglass & Eskdale Railway.

Arlesdale Green is around 9.8 miles (15.8 km) from Arlesburgh West. It is situated at the point where the railway's route begins to deviate from the route of the Mid Sodor Railway; shortly after the station the railway curves round 90° southwards, away from the Mid Sodor Railway's route.[1] This station is based Eskdale Green station on the Ravenglass & Eskdale Railway.

Arlesdale is the eastern terminus of the railway, and is approximately 11.75 miles (18.91 km) from Arlesburgh West. It serves the village of Arlesdale.[1] This station is based on Eskdale (Dalegarth) station (now more commonly known as Dalegarth for Boot station) on the Ravenglass & Eskdale Railway.

The Arlesdale Railway first appeared in Small Railway Engines, the 22nd book in The Railway Series, in 1967. It has also featured in season 20 and season 21 of Thomas & Friends.

In The Railway Series (in the books)[edit]

Books in which the Arlesdale Railway plays a supporting role[edit]

In Thomas & Friends (on television)[edit]

The railway first appeared in the twentieth season of Thomas the Tank Engine and Friends. At this time it closely followed the layout as portrayed in The Railway Series books, but from Season 21 it differed significantly.

Retrieved from "https://en.everybodywiki.com/index.php?title=Arlesdale_Railway&oldid=921479"
Categories:
Hidden categories:
This page was last edited on 5 August 2020, at 00:17.
This page has been accessed 94 times.
Content is available under License CC BY-SA 3.0 unless otherwise noted.
Privacy policy
About EverybodyWiki Bios & Wiki
Disclaimers
Mobile view