Asia New Bay Area (Chinese:亞洲新灣區) is an industrial, exhibition and cultural site located at the port of the Taiwanese city of Kaohsiung. It is a major construction of Kaohsiung City, Taiwan's industrial transformation, in order to promote the urban development of Kaohsiung Harbor and downtown Kaohsiung.

The area of ​​Asia New Bay Area is about 600 hectares and the total investment amount is about NT$ 130 billion, with funds coming from the Central and Kaohsiung City Government, along with investments from enterprises..[1] Asia's New Bay Area expands Kaohsiung's international visibility, enabling Kaohsiung to become a Global City to further attract both domestic and foreign investors.[2] 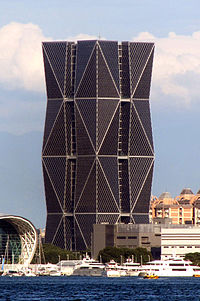 The total area of the ​​Asia New Bay Area is more than 600 hectares. It is south of Xinwan District in Asia to Kaixuan Road, the north is Wufu Road, the east side is Yixin Road, and the west is to Gushan Hama Star. [3]

The Asia New Bay Area is located at the port of Kaohsiung city or in its immediate vicinity. The 500-acre site spans parts of the Gushan, Yancheng, Lingya and Qianzhen districts. The facilities are located on previously industrialized land, which had become vacant and fallow due to the transformation and rationalization of Kaohsiung Harbor. All the buildings in the Asia New Bay Area will adopt international competition and the concept of green buildings, which will promote Kaohsiung City's filmindustry, exhibition, culture, tourism and Yacht industries.[4]

The Kaohsiung Exhibition Center offers space for 1500 standard measuring stands, a conference room for 2000 participants, two conference rooms for 800 participants and ten for 20 to 40 participants. The construction began in October 2011, and on October 18, 2013, the finished building was opened. The first fair held here was the "Taiwan International Fastener Show" on April 14, 2014.[5][6] In the immediate vicinity of the center, there is the modern high-rise building with the headquarters of China Steel Corporation.

Skyline of Kaohsiung in 2018 with Kaohsiung Music Center under construction.

The Kaohsiung Port Terminal stretches from pier 18 to pier 21 of the Kaohsiung Harbor and includes an administration building, a conference hall and three jetties. The size of the terminal is sufficient to simultaneously accommodate two 225,000-tonne cruise ships. Construction of the terminal is scheduled for November 2016, with the expected opening in June 2020.[8]

The 20,000 square meter area houses Taiwan's largest public library. It is an ecological building with eight floors and a basement. The book inventory has over 1 million volumes. The library includes a department for international picture books and a children's theater, the first institution of its kind in the country. Architecture and design work were done by Ricky Liu and the Japanese architect Toyo Ito’s team. Construction started in October 2012 and was completed in 2014. Opening to the public in November 2014, it was hailed as a new cultural landmark for Kaohsiung.[9][10] In 2017 the library was regarded as one of the top 10 landmarks of Taiwan by TripAdvisor.[11][12]

The Circular light rail of Kaohsiung Rapid Transit in Taiwan is a ring-free route with no overhead lines. It is Taiwan's first tram. It has 36 stations and its route runs along the Kaohsiung attractions.

Others articles of the Topics Politics AND Economics : Decentralization