Aurora is the annual cultural festival of Atal Bihari Vajpayee-Indian Institute of Information Technology and Management, Gwalior (IIITM Gwalior), an autonomous institute of Government of India.[1][2][3] It is one of the largest collegiate festival celebrations in central India, hence one of the most eagerly anticipated events in the institute calendar. It attracts more than 10,000 students from more than 70 colleges all over the country and attracts a range of well-known performers.[4]

Since the first edition in 2001, Aurora has started its journey, and since then, it is a regular event in the calendar of ABV-IIITM with the caption, “Ensnaring Thy Senses”.[5]

Aurora provides an exclusive stage for the best of the artists, performers and shows stoppers. It promotes friendship, teamwork, alliances, and allows you to exhibit your talents to members of your community and visitors.

One of the most exceptional moments in the history of Aurora is witnessing the performances by the Grammy awardee and Padma Shri Pt. Vishwa Mohan Bhatt, the Mohan Veena player, the well-known Kathak dancer Uma Sharma, and the famous Hindi poet Kumar Vishwas. Prominent music artists and composers have become a regular feature with the diversity and scope increasing with each edition.

For Aurora 20, the theme is Conjuring the Eerie that shall incorporate the events with a horror setting designed to keep you on your toes.

Aurora includes night shows where students experiences live concerts performed by various acknowledged personalities and many competitive events in which winners are attributed to cash prizes and goodies from the sponsors.

With new additions every year, Step Up [6], The Pikture, Eumelia[7], Panorama, Portray It!, Nukkad Natak [8], Le Arte Fiesta[9], Open Mic and, Gamiacs[10] are a few mainstream events at every Aurora. Step Up is the dance events' amalgamation having a solo, group, and street dance battles in its reckoning. Eumelia is a singing event that is a bundle of various sub-events where participants present their vocal and instrumental skills. Panorama and Portray It! are photography events where pictures will be depicting their stories. Nukkad Natak has a social message embedded in street plays. Mr. and Ms. Aurora [11] is a talent hunt to test the confidence, aptitude, IQ, and wits of the participants. The Pikture [12] is the videography and short film making competition for budding directors.

Parivesh [13], the fashion exhibit of Aurora, is one of the flagship events where fashion is inspired by youth and nostalgia and draws inspiration from the best of the past portraying the 20’s extravaganza.

Aurora has witnessed many fashionistas flawing their custom outfits and become a trendsetter in the modern generation.

Another one of the splendid flagship events, Corna [14], is the ultimate battle of bands where bands from all over India compete to showcase their musical prowess. Rock bands are invited to portray a show of their skills. 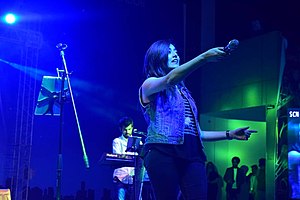 Aurora has hosted many musical talents, most recent being Jonita Gandhi, Vinod Kumar Dwivedi, the headlining band Nalayak, and DJ TEJAS in 2018. In the past performances have been held by Benny Dayal in 2015, Neeraj Shridhar in 2014, Shalmali Kholgade, and Kunal Ganjawala in 2013, Shibani Kashyap in 2012, Kunal Bureau in 2010 and Neeti Mohan in 2009. Some Renowned bands like The Local Train, Astitva, and Ashwamedha have also been a part of Aurora’s history.

Aurora 15 was a venue for the Sunburn Campus EDM festival in 2015. Sunburn returns to Aurora 20 featuring DJ Olly Esse and Aceaxe.

The cultural fest not only provides entertainment but also serves the purpose of enlightening people regarding the various issues surrounding them. We always believe in giving back to society.

Aurora Social Responsibility is a campaign to promote awareness regarding various social issues prevalent in the city and bring participation from multiple stakeholders to curb those issues. It acts as a linkage between the institute, the community, and the surroundings to interact, discuss, and collaborate on various environmental aspects. Thus influenced thousands of lives directly or indirectly.

Retrieved from "https://en.everybodywiki.com/index.php?title=Aurora_(festival)&oldid=860546"
Categories:
Hidden categories:
This page was last edited on 17 July 2020, at 11:04.
This page has been accessed 172 times.
Content is available under License CC BY-SA 3.0 unless otherwise noted.
Privacy policy
About EverybodyWiki Bios & Wiki
Disclaimers
Mobile view