The Australian Koala Foundation (AKF) is an international non-profit scientific organisation that aims to diminish the threats to the survival of koalas and in doing so raise the awareness of the global community to help save endangered fauna and flora.[1] It is the principal non-profit, non-governmental organisation dedicated to the conservation and effective management of the wild koala and its habitat.

The koala lives predominantly on a diet of eucalyptus plants. Many of these trees are being cleared each year. The primary focus of the AKF is getting new legislation in place to protect Koala trees.[2] The organisation receives no form of government funding by choice, because this leaves the AKF to speak freely for Koalas without the constraints of government. Therefore, the AKF relies on donations, sponsorship, and fundraising to finance its ongoing work. AKF research indicates that somewhere between 47,860 and 85,695 koalas remain in the wild.[3] Local extinctions are occurring regularly, and AKF believes that the only way to protect and regenerate populations into the future is with a Koala Protection Act.[2] 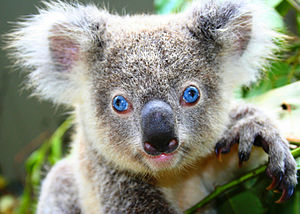 Protecting habitat and managing koala populations are the goals of the foundation.

During the mid-1980s, Steve Brown, a veterinary graduate who had developed a special interest in koalas, was pursuing Ph.D studies at the University of Queensland, focusing on a not uncommon pathological condition in koalas, cystic ovaries. This condition was associated with low reproductive rates. He provided evidence to suggest that chlamydial disease may be affecting population dynamics of wild koala colonies. As a result of his studies he became convinced that chlamydial disease was a major threat to the species, given the widespread occurrence of the organism. This conviction led him to seek support for the establishment of a body which could fund research into the koala and its problems.

In 1985, when Barry Scott was asked to manage the Oasis Tourist Gardens, he met Steve Brown who was acting as the honorary veterinary consultant to a colony of disease free koalas that lived there. brown was a passionate advocate for the koala and he inspired Scott who suggested that a Foundation for the koala be formed. Together they began to gather friends and supporters around them to form an organisation to help cure koala diseases and save their declining numbers.

Initially the focus of the Australian Koala Foundation was to 'raise $5 million to save the koala'. At the beginning the general consensus was that the disease commonly known as chlamydia was the major threat to koalas and that it needed to be cured so the population could be saved. It didn't take long, however, to realise that habitat destruction was and is the main cause of the koala's problems. The direction of the AKF moved towards addressing the loss of habitat and reversing it.

Deborah Tabart OAM has been leading the Australian Koala Foundation as CEO since 1988.

Today, the AKF uses science, politics, and a global support base to rally for change at the legislative, developmental, and personal level.

"No Tree No Me" is the slogan for the AKF. It was coined by the AKF's creative supporter, Dick Marks, in 1994 and has become an appropriate slogan for the foundation as they focus on the fight for habitat conservation of the koala. This slogan is known in households all around Australia, and has been printed on apparel and stickers on the popular worldwide online retailer Redbubble.

The AKF has mapped over four million hectares of land for their Koala Habitat Atlas (see below). The AKF believes that captive breeding programs for koalas are not a solution for the conservation of wild koala populations. Instead, conservation relies on the integrity of wild populations, their genetic diversity, and retention of habitat. As a result, many of the AKF projects focus on conservation of the koala habitat as described below.

The AKF has several ongoing projects dedicated to saving the wild koala through conserving its habitat and raising funds to enable the AKF to continue running despite its non-profit status. These include:

The AKF is the world's largest funding body of koala research. Research findings include the contribution made by koalas to Australia's tourism industry and viability studies on koala populations in various bioregions.[16]

More than 40,000 km2 of land has been mapped for the Koala Habitat Atlas, which displays the occurrence of suitable koala habitat (even if there are no koalas there at present). More than 1,000 sites were identified in South East Queensland alone.[17]

The foundation has done extensive research on the way Koala's live along with their ideal habitat conditions. They have formed a program that encourages and makes it easily accessible for people to purchase and plant trees for Koalas. They release the National Kola Tree Planting List which is comprised from the AKF's extensive database (includes over 100,000 trees from 2000 sites), published research, and collaboration from several independent Koala researchers, the list covers everywhere that Koalas live and takes into account 273 local government areas across 4 states. They have identified the best conditions for Koalas to live in and ensure that donated trees are planted in those areas.

The Australian Koala foundation has also created a Koala-friendly housing development with the goal of allowing people in the community to co-exist with wild Koalas in a proper manner. They partnered with The Ray Group to create this sight on the northern New South Wales coast. This site is home to 500 residential homes along with Koala's and other endangered species. Since its beginning in 1994, the Koala Beach Housing Development has seen great success.

The foundation is also very strong with updating the public on Koala's and their habitats as it has countless research projects posted on its website to inform and educate people. The foundation gives people the resources to help in interesting ways such as adopting your own Koala or purchasing Koala merchandise to raise money.

File:SavetheKoalaMonth.jpg
September is Save the Koala Month.

The main AKF office and shop are located in Brisbane. There are also "Friends of the AKF" branches in New York and Washington.

Retrieved from "https://en.everybodywiki.com/index.php?title=Australian_Koala_Foundation&oldid=1746058"
Categories:
Hidden categories:
This page was last edited on 28 May 2021, at 20:43.
This page has been accessed 30 times.
Content is available under License CC BY-SA 3.0 unless otherwise noted.
Privacy policy
About EverybodyWiki Bios & Wiki
Disclaimers