Await Further Instructions is a 2018 horror film from the United Kingdom.[1] In the film, a dysfunctional family is entrapped in their house by a black substance and receives commands from their TV.[2][3]

The movie opens with the ominous phrase: "It's the things you love that kill you." Nick and his girlfriend, Annji, visit his parent's house for Christmas. Kate, Nick's pregnant sister, and her jock husband, Scott, also stop by. Grandad is present as well. During dinner, a family fight breaks out over Kate's racism toward Annji. Nick and Annji sneak out of their rooms during the night to leave early but discover that the all of the doors and windows are covered by a black barrier.[4] All attempts to break it are to no avail. The family gathers downstairs and turns on the TV, and discover a message in green words "STAY INDOORS AND AWAIT FURTHER INSTRUCTIONS." Their Dad, Tony, decides that they should eat Christmas dinner like usual, but before they can begin, the TV delivers the message "ALL YOUR FOOD IS CONTAMINATED. EAT NOTHING." After discarding all of the food, another message appears: "DECONTAMINATE YOURSELVES. STRIP AND SCRUB ALL FLESH WITH HOUSEHOLD BLEACH." They all follow the instructions, though most of them are reluctant. A bag of hypodermic needles falls through the chimney, and the TV reads "USE TRIAL VACCINATIONS. ATMOSPHERE CONTAMINATED." Although Annji, a doctor, identifies the needles as used, the Tony forces them to injecting themselves. Shortly after, Grandad suddenly convulses and vomits a black liquid before dying. The TV displays "VACCINATION PROCEDURE COMPLETE.", then "RETURN ALL CLINICAL APPARATUS VIA THE ACCESS SLOT." After doing so, Scott attempts to pry the slot open, but the TV displays "ACCESS SLOT CONTAMINATION." in red letters. The slot snaps closed, dismembering three of his fingers.

Later, Tony gathers the family downstairs because the TV now reads: "ONE OF YOUR NUMBER IS INFECTED. ISOLATE THEM." The family racistly assumes that Annji has brought a virus from India and force her upstairs and lock her in a bedroom with Grandad's body. Nick, in desperation, unplugs the TV. Tony quickly plugs it back in, and strange symbols flash on the screen, then are replaced, in red letters, by "WARNING INTERRUPTING EMERGENCY SIGNAL PUTS LIVES AT RISK". Kate demands that Scott take control of the situation, persuading him to attack Nick on the stairs, but Kate is knocked over the railing during the brawl, breaking her leg. During the confusion, Scott sees a brief message flash across the screen: "I SEE YOU." After this, Nick searches for an exit makes an opening around the toilet pipes and uses his smartphone's camera to look inside. In the living room, the TV beeps and flashes the red words "DANGER EXFILTRATION IN PROGRESS", then "SURVIVORS MUST NOT BREACH PERIMETER". Tony and Scott head upstairs to investigate. In the bathroom, Nick watches the video, and see wiggling tendrils that attempt to attack the phone. Tony and Scott rush in, knock Nick unconscious, and drag him downstairs. Tony follows the TV's latest instructions to "EXTRACT INFORMATION FROM SLEEPER AGENT" by torturing Nick with a retractable knife but Beth enters and stops him by informing them that Kate has succumbed to her injuries.

In the bedroom, Annji searches in the closet and finds another TV displaying the words "I SEE YOU". The living room TV then reads "SECURITY BREACH FIRST FLOOR" and, after, "ACTIVATING QUARANTINE BEDROOM 1". and "ACTIVATING QUARANTINE BEDROOM 2" subsequently. The vent pipes in the bedrooms begin to vent black smoke. The TV beeps and flashes the red words: "ALL SURVIVORS RETURN TO GROUND FLOOR". Nick rushes upstairs and frees Annji, but can't get Beth out of the bathroom. Beth begins developing large black sores on her face, and soon explodes into black liquid.

Nick and Annji rush downstairs and find the TV displaying a bright light, and Nick unplugs the TV. The light stays on the TV, however, and the house begins shaking. After it stops, the TV reads "I AM REBORN," "I BRING SALVATION," and "RESURRECTION". Annji reveals to Nick that she saw a black throbbing "heart" inside of the TV upstairs. Nick falls unconscious and awakes to he and Annji being restrained by Scott and Tony who are carrying out the TV's instructions to "MAKE A SACRIFICE TO SAVE THE UNBORN." Tony attempts to sacrifice Annji, but Nick and Scott attack him, and Tony murders Scott with an axe. A fight between Tony and Nick ends when Nick throws the TV onto Tony, killing him. The TV rights itself and wire-like tendrils snake out of the TV and enter Tony via the back of his head and take control of his body. They soon realize that the black substance is entirely comprised of the living wires. Nick confronts the wires, and throws the axe into the "heart" inside the TV. The tendrils seemingly die, but soon begin moving and engulf them. Tony, being controlled by the wires, murders them with the axe. The tendrils digest Kate's body, leaving only the skeleton and the baby. Tony brings in another TV, which shows bright colors and reads "HELLO RUBY. WORSHIP ME."[5] 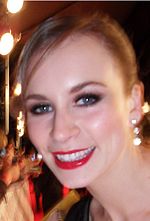 Retrieved from "https://en.everybodywiki.com/index.php?title=Await_Further_Instructions&oldid=1694177"
This page was last edited on 9 May 2021, at 09:58.
This page has been accessed 27,315 times.
Content is available under License CC BY-SA 3.0 unless otherwise noted.
Privacy policy
About EverybodyWiki Bios & Wiki
Disclaimers