Bed & Breakfast is a 2006 short fantasy drama film written and directed by Martin Beilby and Loïc Moreau, starring Ellen Feiss and Brian Quinn.[1] The film is set in Dordogne, France, and was released on 7 July 2006 in Paris. The narrative focuses on an American couple, Nathan and Laura, who travel to France in search of a friend of Nathan's who has inherited a castle there. It is most famous for starring Ellen Feiss, who had become an Internet phenomenon after appearing in an Apple commercial at age 14.[2]

Nathan (Brian Quinn) and Laura (Ellen Feiss), a young American couple, travel to France on holiday to search for Baptiste (Rúaidhrí Conroy), an old friend of Nathan's who has inherited a castle in the Dordogne region of France; Nathan's motivations for the trip aren't clear, but Laura's presence is more than fortuitous.

Whilst walking through a forest on the way to the castle, they find a bizarre banquet with Baptiste and his French friends there, however he does not appear to recognise Nathan. He and the other guests at the table torment Nathan into leaving, preventing him from seeing Baptiste seduce Laura. Nathan and Laura's relationship is strained in the strange world Baptiste has created in the castle. 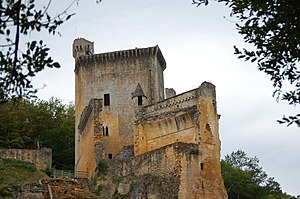 The castle scenes were shot in Chateau de Commarque

The film had a budget of around €65,000 and was produced by Screenrunner in association with Sylicone. Filming began in September 2005 and took two weeks to shoot.[3] The castle scenes were filmed in Château de Commarque, located in the Dordogne region of France.[4] The writers were influenced by the work of Lewis Carroll, and intended to show the transition from the real world to a dream like world throughout the film.[4]

The film's directors had seen Ellen Feiss in a popular Apple commercial which had become an Internet phenomenon, and hoped her internet star power would boost the film's popularity. They contacted Feiss in June 2005 during her last year of high school, offering her a role in the movie, despite her having no formal acting experience. Feiss initially rejected the offer, as they had obtained her number illegitimately. She eventually agreed to do the unpaid role, although her flight and housing were paid for.[5]

Retrieved from "https://en.everybodywiki.com/index.php?title=Bed_%26_Breakfast_(2006_film)&oldid=1820624"
Categories:
Hidden categories:
This page was last edited on 20 July 2021, at 13:23.
This page has been accessed 36 times.
Content is available under License CC BY-SA 3.0 unless otherwise noted.
Privacy policy
About EverybodyWiki Bios & Wiki
Disclaimers