The courthouse was converted fully to use as a school in 1861[3], and as of 2019[update] it is the pre-kindergarten through fifth grade Bellevue Elementary School in the Bellevue Community School District serving 381 students and 40+ staff.[4] The original building has since been surrounded by additions. The south wing was added in 1870 and the north wing was added in 1872. A gymnasium and cafeteria were completed in the 1950s, and two 2-story classroom wings in the 1960s and 1970s. Previously, the school was in a park-like, town square setting, but has since been paved with asphalt with most trees removed and modern playgrounds added. The building was added to the National Register of Historic Places on July 2, 1981.[5] 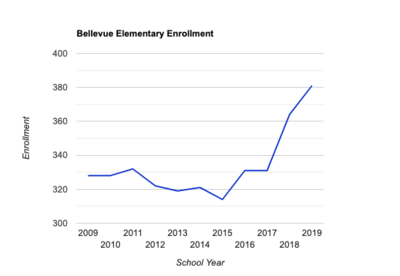 The Old Jackson County Courthouse is a two-story, brick, vernacular Greek Revival structure. It takes the form of a traditional Greek temple without a portico. Unadorned, 2-story wings flank the main façade to the north and south. The building is capped with a hip roof with one gable. On the roof above the arched main entrance once stood a large cupola featuring a cloister vault shaped roof and large bell. The cupola was removed sometime during the mid 20th century due to deterioration and leaks in the roof. Other decorative elements of the building include a classical pediment with a returned cornice and half-moon window as well as simple brick projecting pilasters on all three sides of the main façade. Native limestone gathered from local quarries make up the exposed rough cut foundation, window sills, lintels, and front steps. Although the interior was altered drastically numerous times throughout the past 175 years to accommodate changing education practices and modern amenities, it still retains tin ceilings (mostly covered by dropped ceilings), much of its original woodwork (although heavily painted and damaged), and its grand stairway with large wooden newel posts. Other antique features include original schoolhouse style glass light fixtures from the early 1900s, cast iron radiators, and some original window panes.

Discussion began in 2017 to determine the future of the building, as the structure is nearing 175 years in service, with significant repairs needed to improve green space, safety, aesthetics, and the overall declining functionality of the building as a 21st-century education center. Major renovations and addition or completely moving the school to a newly constructed building are likely in the near future.

School district taxpayers failed to pass a $16 million bond referendum that would have provided for a new elementary school on September 11, 2018, with 44% of voters approving the measure (short of the 60% supermajority required for approval). The district has reduced the proposed building's square footage from 69,000 sq. ft. to 56,000 sq. ft. and voted on a $14.5 million referendum on April 2, 2019. The referendum failed once again with 46% voter approval, but the district continues to work towards improving the decaying building and campus.

Retrieved from "https://en.everybodywiki.com/index.php?title=Bellevue_Elementary_School_(Iowa)&oldid=863814"
Categories:
Hidden categories:
This page was last edited on 18 July 2020, at 13:16.
This page has been accessed 476 times.
Content is available under License CC BY-SA 3.0 unless otherwise noted.
Privacy policy
About EverybodyWiki Bios & Wiki
Disclaimers