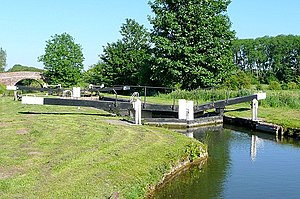 Benham Lock, formely known as Benham Bridge Lock[1] is a lock on the Kennet and Avon Canal, between Kintbury and Newbury. It is located below Marsh Benham, but in the civil parish of Enborne, in the English county of Berkshire.

In January 2017 the Canal and River Trust had to adjust, refit and repair the gates at Benham Lock due to them not closing properly and wasting water, the brickwork on the lock being re-pointed at the same time.[3]

Retrieved from "https://en.everybodywiki.com/index.php?title=Benham_Lock&oldid=1646120"
Categories:
Hidden categories:
This page was last edited on 20 April 2021, at 09:41.
This page has been accessed 162 times.
Content is available under License CC BY-SA 3.0 unless otherwise noted.
Privacy policy
About EverybodyWiki Bios & Wiki
Disclaimers