Sometimes referred to as "90210," one of its primary ZIP codes, it is home to many celebrities, luxury hotels and the Rodeo Drive shopping district.

Originally a Spanish ranch where lima beans were grown, Beverly Hills was incorporated in 1914 by a group of investors who had failed to find oil, but found water instead and eventually decided to develop it into a town. By 2013, its population had grown to 34,658.

Gaspar de Portolá arrived in the area that would later become Beverly Hills on August 3, 1769, travelling along native trails which followed the present-day route of Wilshire Boulevard.

Henry Hammel and Andrew H. Denker acquired most of it and used it for farming lima beans.[9][11] At this point, the area was known as the Hammel and Denker Ranch.[9] By 1888, Denker and Hammel were planning to build a town called Morocco on their holdings.[9][12] 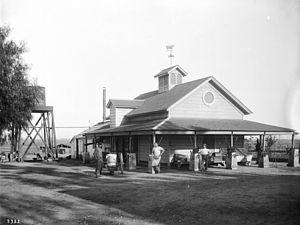 In 1900, Burton E. Green, Charles A. Canfield, Max Whittier, Frank H. Buck, Henry E. Huntington, William G. Kerckhoff, William F. Herrin, W.S. Porter, and Frank H. Balch, formed the Amalgamated Oil Company, bought the Hammel and Denker ranch, and began looking for oil.[9][13][14] They did not find enough to exploit commercially by the standards of the time, though.[14] In 1906, therefore, they reorganized as the Rodeo Land and Water Company, renamed the property "Beverly Hills," subdivided it, and began selling lots.[14][15] The development was named "Beverly Hills" after Beverly Farms in Beverly, Massachusetts and because of the hills in the area.[13][14] The first house in the subdivision was built in 1907, although sales remained slow.[16]

Beverly Hills was one of many all-white planned communities started in the Los Angeles area around this time.[17] Restrictive covenants prohibited non-whites from owning or renting property unless they were employed as servants by white residents.[12]:57 It was also forbidden to sell or rent property to Jews in Beverly Hills.[18]

Burton Green began construction on The Beverly Hills Hotel in 1911. The hotel was finished in 1912. The visitors drawn by the hotel were inclined to purchase land in Beverly Hills, and by 1914 the subdivision had a high enough population to incorporate as an independent city.[13] That same year, the Rodeo Land and Water Company decided to separate its water business from its real estate business. The Beverly Hills Utility Commission was split off from the land company and incorporated in September 1914, buying all of the utilities-related assets from the Rodeo Land and Water Company.[19]

In 1919, Douglas Fairbanks and Mary Pickford bought land on Summit Drive and built a mansion, finished in 1921[20] and nicknamed "Pickfair" by the press.[21] The glamour associated with Fairbanks and Pickford as well as other movie stars who built mansions in the city contributed to its growing appeal.[20]

By the early 1920s the population of Beverly Hills had grown enough to make the water supply a political issue.[22] In 1923 the usual solution, annexation to the city of Los Angeles, was proposed.[10]:65 There was considerable opposition to annexation among such famous residents as Pickford, Fairbanks, Will Rogers[23] and Rudolph Valentino.[24] The Beverly Hills Utility Commission, opposed to annexation as well, managed to force the city into a special election and the plan was defeated 337 to 507.[10]:65

Downtown Beverly Hills at night with Century City in the distance

In 1925, Beverly Hills approved a bond issue to buy 385 acres (1.6 km2) for a new campus for UCLA. The cities of Los Angeles, Santa Monica and Venice also issued bonds to help pay for the new campus.[25] In 1928, the Beverly Wilshire Apartment Hotel (now the Beverly Wilshire Hotel) opened on Wilshire Boulevard between El Camino and Rodeo drives, part of the old Beverly Hills Speedway.[26] That same year oilman Edward L. Doheny finished construction of Greystone Mansion, a 55-room mansion meant as a wedding present for his son Edward L. Doheny, Jr. The house is now owned by the city of Beverly Hills.[27]

In the early 1930s, Santa Monica Park was renamed Beverly Gardens and was extended to span the entire two-mile (3-kilometer) length of Santa Monica Boulevard through the city. The Electric Fountain marks the corner of Santa Monica Blvd. and Wilshire Blvd. with a small sculpture at the top of a Tongva kneeling in prayer. In April 1931, the new Italian Renaissance-style Beverly Hills City Hall was opened.[16]:9

In the early 1940s, black actors and businessmen had begun to move into Beverly Hills, despite the covenants allowing only whites to live in the city. A neighborhood improvement association attempted to enforce the covenant in court. The defendants included such luminaries as Hattie McDaniel, Louise Beavers, and Ethel Waters. Among the white residents supporting the lawsuit against blacks was silent film star Harold Lloyd. The NAACP participated in the defense, which was successful. In his decision, federal judge Thurmond Clarke said that it was time that "members of the Negro race are accorded, without reservations or evasions, the full rights guaranteed to them under the 14th amendment."[28] The United States Supreme Court declared restrictive covenants unenforceable in 1948 in Shelley v. Kraemer. A group of Jewish residents of Beverly Hills filed an amicus brief in this case.[29]

In the late 1990s, the Los Angeles County Metropolitan Transportation Authority (LACMTA) proposed to build an extension of the Metro Red Line along Wilshire Boulevard and into downtown Beverly Hills, but the city opposed it.[39]

In 2001, LACMTA then proposed a bus rapid transit route down Santa Monica Blvd., but this was also opposed by the city and never built. Currently this stretch of road is served by less efficient Metro Rapid buses using pre-existing roadways.[39] By 2010, traffic in Beverly Hills and surrounding areas had grown bad enough that the city's habitual opposition had largely turned to support for subways within the city limits.[40] As part of the Westside Subway Extension project, the Purple Line of the LA Metro Rail is planned to be extended through Beverly Hills, adding two underground stations at Wilshire/La Cienega and Wilshire/Rodeo by the 2020s.[41]

In the midst of the 2015 drought, Beverly Hills was found to be one of the biggest water consumers in all of California.[42] As a result, they were asked by the state to reduce their consumption by 36%, prompting many residents to replace their lawns with native plants.[42] Meanwhile, the city government replaced the grass in front of the City Hall with Mexican sage.[42]

In September 2015, the City of Beverly Hills signed an agreement with the State of Israel to work together on water use as well as "cybersecurity, public health, emergency services, disaster preparedness, public safety, counterterrorism and art and culture".[43]

In July 2016, the City of Beverly Hills received the Livability Award from the United States Conference of Mayors for its Ambassador Program, which takes care of the city's homeless population.[44]

In November 2016, the Beverly Hills City Council passed a resolution to condemn the decision made by the UNESCO to deny the Jewish history of Temple Mount and the Western Wall in Jerusalem, Israel.[47]

In spite of the city's name, most residents live in the "flats" of Beverly Hills, which is a relatively flat land that slants towards the hills, and includes all of Beverly Hills itself. The houses situated in the hillside north of Sunset Boulevard have a much higher value than the average housing price for the rest of the city. Santa Monica Boulevard divides the "flats" into two areas, locally known as "North or South of the tracks," referring to the train tracks that were once used by the old Pacific Electric streetcar line that traversed Beverly Hills along Santa Monica Blvd. Houses south of Wilshire Boulevard have more urban square and rectangular lots, in general smaller than those to the north. There are also more apartment buildings south of Wilshire Blvd. than anywhere else in Beverly Hills, and the average house value south of Wilshire is the lowest in Beverly Hills. Nearly all businesses and government offices in Beverly Hills are located south of Santa Monica Blvd. Two notable exceptions are the Beverly Hills Hotel and the Beverly Hilton Hotel. Just outside the city limits to the west lies the Los Angeles Country Club. Other locations commonly associated with Beverly Hills include the Cedars-Sinai Medical Center and the Beverly Center, just outside the city limits to the east.

There were 15,035 households out of which 24.4% had children under the age of 18 living with them, 43.8% were married couples living together, 8.1% had a female householder with no husband present, and 45.0% were non-families. 38.2% of all households were made up of individuals and 11.3% had someone living alone who was 65 years of age or older. The average household size was 2.24 and the average family size was 3.02. 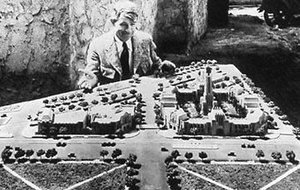 Beverly Hills is a general law city governed by a five-member City Council including the mayor and vice mayor. The City Council hires a city manager to carry out policies and serve as executive officer. Until 2017, every odd-numbered year, either two or three members were elected for four-year terms. However, in 2017, the Council changed its cycle to conform with statewide elections; the first such election will be held in March 2020. [58] Each March the City Council meets and chooses one of its members as mayor and one as vice-mayor. As of 2018, Julian Gold is Mayor, John Mirisch is Vice Mayor, and Lester Friedman, Robert Wunderlich, and Lili Bosse are members.[2] Mahdi Aluzri serves as City Manager.[3]

In the United States House of Representatives, Beverly Hills is in California's 33rd congressional district, represented by Democrat Ted Lieu.[60] 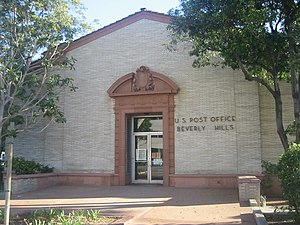 The city of Beverly Hills widely opposed Proposition 8, the 2008 ballot measure which repealed legal recognition of same-sex marriages. The proposition passed statewide, but in Beverly Hills, only 34% voted in favor, and 66% voted against it.[69] In 2007, Jimmy Delshad became the city's first Iranian-born mayor, representing the city's large Persian Jewish population.[70]

Beverly Hills is home to one Fortune 500 company, Live Nation Entertainment. Since August 22, 2011, the headquarters of Metro-Goldwyn-Mayer have been located in Beverly Hills.

The large and still-productive Beverly Hills Oil Field has four urban drilling islands, which drill diagonally into the earth underneath the city. One drilling islands occasioned a 2003 lawsuit representing former attendees of Beverly Hills High School, approximately 280 of which having suffered from cancers allegedly tied to the drilling operations.[72]

According to the city's 2015 Comprehensive Annual Financial Report, the top employers in the city are: 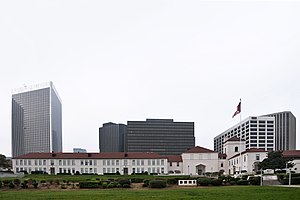 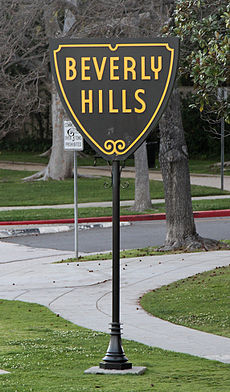 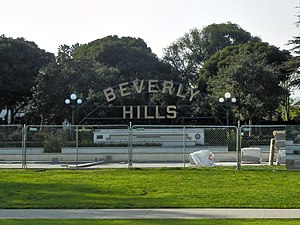 The BHUSD has a public-access television station called KBEV, which is run by the students of Beverly Hills High School.[114] KBEV was founded in 1968. KBEV produces many programs, including the Norman News, which is the longest running student news service in the country.

In April 2016,[115] the Beverly Hills City Council passed a resolution[116] to create autonomous vehicles for public transportation within the next decade.[117] Mayor John Mirisch has said this is one of his top priorities during his tenure as mayor. "This is a game-changer for Beverly Hills and, we hope, for the region," said Mirisch in the press release. "Beverly Hills is the perfect community to take the lead to make this technology a reality. It is now both feasible and safe for autonomous cars to be on the road."[118]

Beverly Hills has been featured in a number of television shows and movies, including:

Share
Retrieved from "https://en.everybodywiki.com/index.php?title=Beverly_Hills,_California&oldid=269363"
Categories:
Hidden categories:
This page was last edited on 21 December 2018, at 20:35.
Content is available under License CC BY-SA 3.0 unless otherwise noted.
This page has been accessed 1,644 times.
Privacy policy
About EverybodyWiki Bios & Wiki
Disclaimers