"Bonds" is the sixth episode of the tenth season of the post-apocalyptic horror television series The Walking Dead, which aired on AMC on November 10, 2019.

At Alexandria, Carol Peletier prepares to go out on her own to find Negan, but Daryl insists on coming with her. Outside, Carol states she has a different plan, and sets up a watchpoint in view of the Whisperers' border, looking to spy on what the Whisperers are doing and hoping to learn how to better them. While they wait, Carol implores Daryl to admit his feelings for Connie, while Daryl tells Carol he does not trust her anymore, fearing she might try to assassinate Alpha and worsen things. After some time, they see a Whisperer moving to bring a herd of walkers to their territory. Carol wants to follow but agrees to Daryl not to kill any walkers. As they pursue, they make too much noise that draws the walkers back to them. While Daryl takes to hiding, Carol uses the opportunity to capture the Whisperer leading them. They return to Alexandria with their captive. Meanwhile, Siddiq and Dante rush to fight off a fast-moving infection within Alexandria that is incapacitating several, unaware the infection was caused by the contamination of the water supply by Gamma. After a long day, Siddiq falls asleep in the infirmary but then wakes up on the windmill's balcony, unsure how he got there.

At Hilltop, Eugene is manning the radio, upgraded with components from the fallen satellite, and completing his check-ins with the other communities, including learning about the infection at Alexandria from Rosita. As he is about to leave, a new radio signal comes in with a female voice. He answers it, but both agree for safety to avoid using their names or specifics of where they are each located. Eugene and the woman talk more about their current state, but the woman insists that Eugene should keep these conversations private.

Negan is taken by Beta to Alpha, trying to prove his value for knowing everything about the communities' plans. Alpha decides to test Negan to see if he's worthy, which disturbs Beta. Alpha sees this, wondering if Negan is challenging Beta's position, but Beta quickly submits to Alpha, which Negan notices. Beta oversees Negan's tests, which involve digging holes in which to bury walkers after they collect their skins. Negan is unable to outdo Beta's strength and is compelled to capture a live pig to present as food for the other Whisperers to try to prove his worth. Despite this, Beta refuses to give him any food, though another Whisperer shares a bit of jerky with him. Beta catches this and kills the Whisperer as a walker horde arrives, lured by the food; Beta leaves Negan to defend himself. Beta returns to Alpha to tell her about Negan's death when Negan emerges, blood-soaked but alive. He goes straight to Alpha, kneels in front of her, and submits to her, which enrages Beta.

In an interview with Insider, Ryan Hurst spoke of his time filming the episode: "Beta and Negan, they couldn't be more diametrically opposite than anything. It's this stone-faced immovable person and then you have this mouthpiece who just will not shut up. Jeff [Dean Morgan] and I have been great friends for a long time. So the fact that we get to share the screen together is an enormous joy."[1] 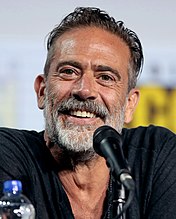 Jeffrey Dean Morgan (left) and Ryan Hurst (right) were praised by critics for their scenes together.

"Bonds" received positive reviews from critics, with particular praise towards Jeffrey Dean Morgan and Ryan Hurst's humorous interactions. On Rotten Tomatoes, the episode has an approval rating of 93% with an average score of 6.98 out of 10, based on 15 reviews. The site's critical consensus reads, "Though it ultimately sets up more than it pays off, 'Bonds' introduces a contentious dynamic between Negan and Alpha that offers some of this season's more memorable character moments."[2]

Ron Hogan writing for Den of Geek! praised Negan's development in this episode and said: "Negan isn't the sort of person who would make a good addition to just about any group on The Walking Dead... He's abrasive, he's loud, he has a huge ego, and he's not exactly the hardest worker or the strongest worker. These are all things that Beta points out to both Alpha and Negan when Negan comes sauntering into the Whisperers camp with his hands tied up. Beta wants to kill him outright, but Alpha seems to have a sixth sense of when people might be useful, so she tells Beta that she wants him to be tested. And if he's found wanting, or if he's found useful, he'll be staying around with the group. One way or another, Negan isn't going back to Alexandria".[3]

Matt Fowler of IGN gave the episode an 8.1 out of 10 and wrote, "The Walking Dead delivered a solid episode thanks to Negan's obnoxious interactions with the Whisperers".[4]

Writing for Forbes, Erik Kain also praised Negan's development during the episode and said: "All told–in spite of my overarching complaints with regards to the show’s broader setup–this was another very good episode. Negan has become, shockingly, one of my favorite characters and he did not disappoint with his first Whisperer encounter. It’s interesting to see Alpha and Beta so at odds over him as well, and Negan’s whole kneeling monologue was hilarious".[5]

In contrast, Jeff Stone of IndieWire gave the episode a mixed review with a "C" grade, and referred to it as "a lot of setup, but not a lot of drama."[6]

Share
Retrieved from "https://en.everybodywiki.com/index.php?title=Bonds_(The_Walking_Dead)&oldid=1646464"
Categories:
Hidden categories:
This page was last edited on 20 April 2021, at 10:36.
Content is available under License CC BY-SA 3.0 unless otherwise noted.
This page has been accessed 807 times.
Privacy policy
About EverybodyWiki Bios & Wiki
Disclaimers