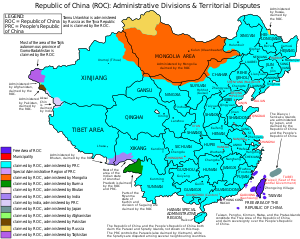 China shares international borders with 14 sovereign states. In addition, there is a 30-kilometre (19 mi) border with the special administrative region of Hong Kong, which was a British dependency before 1997, and a 3-kilometre (1.9 mi) border with Macau, a Portuguese territory until 1999. With a land border of 22,117 kilometres (13,743 mi) in total it also has the longest land border of any country.

The table below, is a table of countries and territories who share a land border with China around its perimeter. The numbers in parenthesis are their lengths in miles.[1]

Retrieved from "https://en.everybodywiki.com/index.php?title=Borders_of_China&oldid=1646480"
Category:
This page was last edited on 20 April 2021, at 10:39.
This page has been accessed 70 times.
Content is available under License CC BY-SA 3.0 unless otherwise noted.
Privacy policy
About EverybodyWiki Bios & Wiki
Disclaimers