The Brewery Collectibles Club of America (BCCA) is a 501(c)(3) organization founded in 1970[1] by Denver Wright Jr. Based in Fenton, Missouri, a suburb of St. Louis, it is dedicated to documenting the history of brewing in the United States and worldwide, and to preserving brewery artifacts. Founded originally as the Beer Can Collectors of America, it was rebranded the Brewery Collectibles Club of America in 2003.[1]

The BCCA has roughly 3000 members worldwide.[2] The BCCA is operated by three Officers (President, Vice-President/Treasurer and Secretary) and a nine-member Board of Directors. It also consists of committees that manage important club operations; these committees produce or manage the club's magazine, website, finances and other critical departments.

Many members also belong to multiple BCCA chapters, which operate club-sponsored events in their local jurisdictions. In addition to roughly 60 regional events, the BCCA has held an annual convention, called CANvention,[3] every year since 1971. Members who have made exceptional contributions to the club's operation are inducted into the BCCA Hall of Fame.

This is an original 1933 prototype beer can, or "test can", manufactured by American Can Company for the Gottfried Krueger Brewing Company of Newark, NJ. BCCA was started by beer can collectors in 1970.

A Miller beer can from the late 1930s; note opening instructions (OI) on the back of the can. BCCA members collect and preserve items like OI cans for their rarity and historic value.

The Gottfried Krueger Brewing Company of Newark, New Jersey put the first beer cans on the market in Richmond, Virginia on January 24, 1935.[4][5][6] Canned beer was an immediate smash, prompting brewers worldwide to install canning lines, or adapt their bottling lines to fill cans.[7] For smaller brewers, that meant "cone top" style cans that could be run through existing bottling lines. For large brewers like Anheuser-Busch, Miller and Pabst, new canning processes were created to fill "flat top" style cans; many early flat top cans had opening instructions printed on the back of the can. Consumers rapidly had a wide variety of canned beers to select from,[7] and hobbyists began accumulating cans from the United States and around the world, at a time when the vast majority of breweries were local or regional (as opposed to latter-day macrobreweries like Anheuser-Busch and Molson Coors).

On October 20, 1969, an article in the St. Louis Globe-Democrat featured the beer can collection of Denver Wright, Jr. The article prompted other St. Louis-area breweriana collectors to contact Wright, and at a meeting at Wright’s house on April 15, 1970, six of these collectors founded the Beer Can Collectors of America.[6][8] By the end of 1971, the BCCA had 304 members, from 17 states and Canada. The BCCA logo was trademarked in 1977.[6][7]

BCCA's membership grew steadily through the 1970s, hitting a peak of 11,954 members in 1978.[9] Membership growth was fostered by an original bylaw that forbade the sale of items at BCCA events, which promoted an inclusive atmosphere; collectors could amass 1000 or more different cans with minimal cost.[10] Brewers took notice, and started issuing myriad specialty and novelty cans, like Billy Beer;[6] however this, ironically, was one factor that triggered a decline in membership in the late 1970s, as collectors found it increasingly difficult to swap when many of the era's cans became easy to obtain. Another factor was the decline of American regional breweries; more than 90% of the breweries that at some point canned beer were defunct by 1980.[7][10] As demand for rarer cans increased, the BCCA's no-sale policy became increasingly anachronistic; the rival (and now-defunct) World Wide Beer Can Collectors organization was started to attract members frustrated by BCCA policies.

Declining membership throughout the 1980s prompted the BCCA to broaden its target audience to include collectors of all breweriana; this led the club to change its name to the current Brewery Collectibles Club of America in 2003.[1] The club also changed its bylaws, allowing chapters to establish their own rules regarding members buying and selling breweriana.[11]

Through its bimonthly magazine and other publications, the BCCA documents the history of brewing in America and worldwide. In 1995, the BCCA authorized the research and publication of the reference guide United States Beer Cans. Volume I, which focused on cans that required an opener (i.e. flat tops and cone tops), was published in 2000,[7] and Volume II, which focused on "self-opening" cans (i.e. pull tabs), was published in 2007.[6]

The BCCA contains an archive of historical beer cans for college reunions. As of 2020, this includes 155 different varieties, including 100 for Princeton University.[12]

The BCCA's Fenton, Missouri headquarters was established in 1977; it consists of an administrative office, staffed by a full-time office manager who coordinates daily business. The office also features a meeting room, library and supply warehouse.[1] Typically, one or two of the six annual board meetings occurs here. The BCCA also has paid employees that work remotely in the roles of magazine editor and staff as well as webmaster.

A BCCA member and his collection of breweriana.

The BCCA has roughly 3000 members as of 2020. Peak membership occurred in 1978, with 11,954 active members during the hobby's heyday.[1][9][13] Annual dues are $40, and $10 for family members. Full and family members have the option to renew for one or three years. Membership benefits include a bi-monthly hardcopy magazine, full access to the BCCA website and library, an annual hardcopy roster with details on all members, and the right to attend the organization's annual 3-day national CANvention.[14]

Membership may also be obtained via a brewing industry partnership, which is usually a chapter-sponsored membership of a local brewery. This membership has all of the benefits of a full membership; in many cases the brewery supports the local chapter's trade shows as well.

Members are assigned a permanent membership number, which represents the total number of signups in the club's history, i.e. the member with membership number 20000 was the twenty-thousandth person to initiate a new membership in BCCA. Of the original six members, only Tony Bruning, #5, is still living and holding active membership. The next lowest active number is #9, belonging to John Ahrens, who has been listed and photographed in the Guinness Book Of World Records for having the world's largest beer can collection.[10][15] Over 35,000 people have had memberships in BCCA during its 50-year history.[citation needed]

All 50 states are represented by multiple active members.[2] In addition, 36 Canadian members representing eight provinces, and 57 members from 17 countries in all five continents outside North America, maintain active memberships.

Malt syrup tins from the 1920s and '30s. Many feature names of American breweries both past and present.

BCCA members typically collect breweriana.[16] Popular items include beer cans, bottles, signs and tap knobs, but anything utilized by a brewery to manufacture or market its products is considered collectible. This includes non-alcoholic items marketed by breweries during Prohibition such as soda and malt beverage containers, malt syrup tins, and ice cream containers. Items that predate Prohibition are highly coveted.[17]

In the BCCA's early years, when collecting was focused almost exclusively on beer cans, members were ranked in five tiers depending on the size of their collections.[4] As the club matured, the focus shifted away from quantity towards valuing the relative rarity, condition, and uniqueness of a given item. Collectors also discovered that the demand for and value of all rare breweriana was growing; many expanded their collections beyond beer cans, which was a key factor spurring the BCCA's 2003 name change.[1][17]

A view of the trade floor at BCCA CANvention 48 in Omaha, Nebraska in September 2018.

The BCCA holds an annual CANvention[18] in August or September, usually in conjunction with Labor Day weekend.[3] All CANventions have been held in the United States with the exception of CANvention 22 in 1992, which was held in Toronto; 27 different states have hosted CANventions,[19] in all regions of the United States. 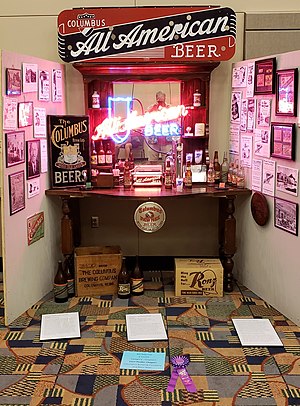 BCCA CANventions feature displays of artifacts from defunct breweries such as the Columbus Brewing Company of Columbus, Nebraska, featured at CANvention 48 (2018) in Omaha.

In addition to these formal events organized by the CANvention committee, several informal events have evolved. These include (among many others) "room-to-room trading", where members arrive at the event hotel in the days prior to the Trade Floor opening on Thursday to get a jump on swapping items;[1] and the Rusty Bunch Dump, where cans that were excavated from the ground or dug out of forgotten basement stashes are piled on the trade room floor on Saturday afternoon for kids and neophyte collectors (in that order) to rummage through and keep.

Seven members (and two spouses) have attended all 49 CANventions; they are the only members of the Tontine Chapter, and they commemorate the achievement with an annual luncheon. Another six members have attended every CANvention except the first one; they are the exclusive members of the Playboy Chapter, so-called because the 2nd CANvention was held at the Playboy Club in Lake Geneva, Wisconsin.

Every CANvention has multiple attendees by members from the five continents outside North America; as many as 20 Australian members attend annually. Current member Rod Maitland of Bryanston, South Africa attended every CANvention between 1990 and 2018.

BCCA sponsors regional shows around the world; these shows are typically smaller and shorter versions of CANvention. Roughly 60 events are held annually.

As of 2020, the BCCA recognizes 92 chapters. Chapters typically consist of members who share a geographic region, such as The Badger Bunch, the first BCCA chapter which was formed by Wisconsin-based members in 1972;[6] there are also 19 "at-large" chapters, made up of members who share a specific collecting interest or status, regardless of where they reside. The largest at-large chapter, known as The Rusty Bunch, is also the largest chapter in BCCA; like many other chapters, the Rusty Bunch publishes a newsletter and maintains a website.[20]

There are five BCCA chapters based outside the United States; three are in Canada, and there is one each in Australia and Brazil.

The membership of two at-large chapters, the Tontine and Playboy chapters, is exclusive to attendees of at least 48 of the 49 CANventions (see CANvention).

The BCCA established a Hall Of Fame in 1983 to honor members who made exceptional contributions to the club.[21] Every person who was named Collector Of The Year prior to the Hall Of Fame's establishment was inducted as a charter member. Since 1983, nominees for the Hall Of Fame are submitted by the BCCA's chapters, and reviewed by the Hall of Fame/Can of the Year Committee; the committee then submits 5 names for the membership to vote on via secret ballot. All members in good standing may mail in ballots, or vote electronically. Members are allowed to vote for up to 2 nominees. Any nominee endorsed on at least half of the ballots is inducted into the Hall Of Fame during the CANvention's closing banquet.

Only living members are eligible for election to the BCCA Hall Of Fame. In 2008, then revised in 2019, the BCCA authorized the Nominating Committee of past presidents to select members not previously selected or deceased members for posthumous induction. As of 2020, there are 64 honorees in the BCCA Hall Of Fame.

Retrieved from "https://en.everybodywiki.com/index.php?title=Brewery_Collectibles_Club_of_America&oldid=1089031"
Categories:
Hidden categories:
This page was last edited on 4 November 2020, at 22:24.
This page has been accessed 25 times.
Content is available under License CC BY-SA 3.0 unless otherwise noted.
Privacy policy
About EverybodyWiki Bios & Wiki
Disclaimers
Mobile view