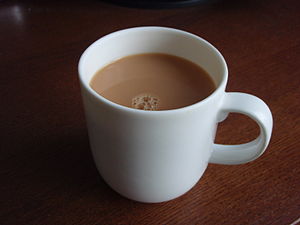 Builder's tea refers to a cup of strong tea.

Builder's tea, also known as a builder’s brew, is a British English colloquial term for a strong cup of tea.[1][2] It takes its name from the inexpensive tea commonly drunk by labourers taking a break. A builder's tea is typically brewed in a mug with a teabag (as opposed to loose tealeaves in a teapot), with milk and sugar.[3]

Builder's tea is typically robust and a rich brown colour. The leaves are often brewed for longer than usual, with an average infusion time of between two and four minutes.[1] Brands high in tannin, caffeine, as well as those containing Assam leaves are better suited to builder's tea.