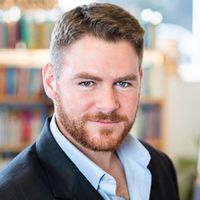 C.J. Adrien (born 18 September 1987) is a French-American historian and author of Viking Age historical novels. He is best known for his debut series about the Vikings in Western France titled Kindred of the Sea. The first book of his newest series, titled The Lords of the Wind, was published on July 4, 2019 in both English and French. He lives in the U.S. with his wife and son in Bend, Oregon.

C.J. Adrien is a bestselling author of Viking historical fiction novels with a passion for Viking history. His Kindred of the Sea series was inspired by research conducted in preparation for a doctoral program in early medieval history as well as his admiration for historical fiction writers such as Bernard Cornwell and Ken Follett. He is also a published historian on the subject of Vikings, with articles featured in historical journals such as L’Association des Amis de Noirmoutier, in France. His novels and expertise have earned him invitations to speak at several international events, including the International Medieval Congress at the University of Leeds, the Oregon Museum of Science and Industry (OMSI), conferences on Viking history in France, among others. C.J. Adrien earned a bachelor’s degree in history from the University of Oregon, a Master’s degree from Oregon State University, and is currently searching for the right university to complete his doctoral thesis.[1] 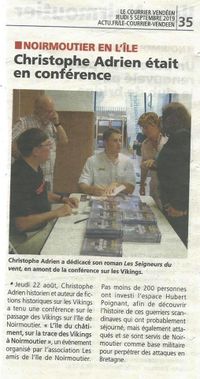 A newspaper clipping from the Courrier Vendéen of C.J. Adrien signing books after his lecture for L'Association des Amis de Noirmoutier.

C.J. Adrien published his first novel, The Line of His People, in 2013. In 2015, he published his second novel, The Oath of the Father. Adrien’s novels continued to grow in popularity through 2015 and 2016, and in 2016, he was invited to be a panelist at the International Medieval Congress at the University of Leeds 2017 to participate in a panel discussion titled, “Imagining the Medieval World: Popular Medievalism and Historical Fiction - A Round Table Discussion”.[2] After the conference, he had the opportunity to interview Bernard Cornwell on the same topic as the panel.[3] Upon his return from his trip to the U.K., Adrien left his first publisher to have his novels re-published by a publisher based in Finland.

In September 2018, Adrien published an article on his research on the Viking invasions of the island of Noirmoutier and the Loire River Valley in the historical journal Lettre Aux Amis no191, a trimestrial publication by the historical association Les Amis de L'Ile de Noirmoutier.[4] His historical research earned him further speaking engagements in the U.S. and France throughout 2018 and 2019.

In 2019, the French publisher Vent-des-Lettres released Adrien's newest novel, Les Seigneurs du Vent, a first-in-series about the life of the Viking Hasting.[5] Following the release of the novel, the publisher organized a book tour in the Vendée region of France. Part of the tour included a lecture on the Viking invasion of the island of Noirmoutier, the subject of Adrien's research.[6] His research and novel quickly rose in popularity, and were featured in several regional newspapers, including the Courrier Vendeen and Ouest France.[7][8][9] Adrien was also interviewed about his research and novels by RCF Radio.[10]

Adrien’s first series of historical novels features the adventures of Abriel, an orphan of a Viking raid raised in a monastery who embarks on a journey to face those who destroyed his home. It takes place during the first Viking raids in 799 A.D. on the island of Noirmoutier, in Southern Brittany.

The first 2 books of the Kindred of the Sea series (beginning in chronological order with The Line of His People and ending with The Oath of the Father) detail Abriel’s adventures as a key pawn in the struggle for succession of the Yngling Dynasty in Norway, and later the ambitions of the warlord Turgeis.

The series is currently out of print after Adrien split from his publisher.

The Saga of Hasting the Avenger[edit]

The Saga of Hasting the Avenger focuses on the life of the Viking Hasting. Published simultaneously in English and in French, the first novel titled The Lords of the Wind details the origins of the historical figure Hasting whose life and career in the Brittany region of France exemplified the ideals of the Vikings. Initial reception of the novel proved overwhelmingly positive, with high marks from critics in France, the U.K., and the U.S., including notable praise from The Historical Novel Society.[11]

The second installment of the novel is set to release in English in July, 2020.