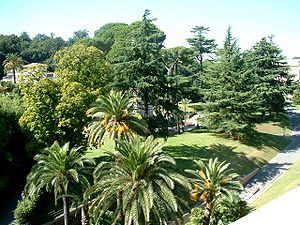 The private Vatican Gardens grow a wide array of plant life, but not cannabis.

Cannabis (in Italian and Latin: canapa)[upper-roman 1] is illegal for any use, cultivation and production in Vatican City.[1] Recreational use of marijuana has been known of and forbidden by the Popes for centuries, for its intoxifying effects and historical association with sorcery; Pope Francis has upheld the traditional prohibition, both in Catholic theology and the law of Vatican City as a country. Due to the very small size of the city-state at 0.44 km2 (0.17 square miles), there is regardless no space for the cultivation of marijuana; the only arable land in the country is the private Gardens of Vatican City.[upper-roman 2] Smoking or otherwise consuming or distributing cannabis within the borders of the city-state is cause for arrest by the Corps of Gendarmerie of Vatican City.[1]

As a result of these laws, the only pharmacy in the Vatican City, the Vatican Pharmacy, does not provide nor sell any sort of cannabis or derivative products and pharmaceuticals.

Given that the Pope is the Supreme Pontiff of the Holy See, whose secular territory includes the Vatican City State as an absolute monarchy he rules as Sovereign,[upper-roman 3] legislation concerning cannabis is dictated by the positions of the Pope himself according to canon law. Although not a strictly necessary outcome, it is most likely that a Pope who advocates for marijuana use would allow for it in the canon law of the Church, and therefore the Vatican City under its secular jurisdiction.

According to Paragraph 2291 of the Catechism of the Catholic Church, use of drugs in general (as well as production and trafficking) is castigated and prohibited for the Catholic faithful:[2]

The exception of "strictly therapeutic grounds" is not further clarified, as the Catholic Church does not possess an official teaching on particular drugs per se, and a "drug" in this context includes pharmaceuticals. This is inferred by the preceding Paragraph 2290 of the Catechism, which prohibits "the abuse of food, alcohol, tobacco, or medicine".[2]

The Papacy historically forbids marijuana, and Pope Francis has retained its position.

In 1484, Pope Innocent VIII issued the papal bull titled Summis desiderantes affectibus,[upper-roman 4] which forbade the use of marijuana and hemp in general, being associated with occultic ritual and witchcraft.[3]

When the Vatican City State seceded from the Kingdom of Italy after the Lateran Treaty of 1929, cannabis was being widely grown for many industries in the latter motherland, alleged to be the second-largest producer in the world, until the rise of synthetic fibers and international crackdown on drugs a few decades later.[4] Industrial cultivation of cannabis was always infeasible within Vatican borders, given it has retained its aforementioned miniscule land since its independence.

In 1961, the Holy See was a signatory of the "neutral group" caucus that assented to the Single Convention on Narcotic Drugs which prohibited production of drugs, including marijuana.[5]

In 2014, Pope Francis spoke in opposition to the legalization of drugs, including cannabis, for recreational use. He called drug use a "scourge", and had previously opposed such before his pontificate when he was Archbishop of Buenos Aires.[6] He has maintained his position as of 2020.

Other articles of the topic Catholicism : Major basilica, Most Holy Trinity Seminary, First Council of Constantinople, St. Columbkille Cathedral, St. Maria Gorret Senior Secondary School Katende, Organisations that defend the Catholic Church's official teaching on homosexuality, Latin
Some use of "" in your query was not closed by a matching "".

You have to Sign in or create an account to comment this article !<comment-streams/>
Retrieved from "https://en.everybodywiki.com/index.php?title=Cannabis_in_Vatican_City&oldid=871581"
Categories:
Hidden categories:
This page was last edited on 19 July 2020, at 20:13.
This page has been accessed 1,061 times.
Content is available under License CC BY-SA 3.0 unless otherwise noted.
Privacy policy
About EverybodyWiki Bios & Wiki
Disclaimers
Mobile view