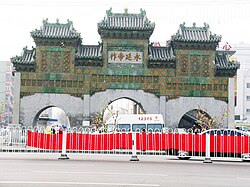 Chaoyangmen Outer Street (simplified Chinese: 朝阳门外大街; traditional Chinese: 朝陽門外大街; pinyin: Cháoyángmén Wài Dàjiē) is a major through route in Beijing, China, and runs through the Chaowai area near Chaoyangmen.[1] Geographically, it is in the eastern urban area, and is still considered very close to the city centre even though it lies outside the 2nd Ring Road.[2] It is north of a similarly significant area, the future Beijing CBD.[3]

Chaoyangmen Outer Street runs from Chaoyangmen Bridge through to the massive Dongdaqiao crossing. In its path lie office blocks, shopping areas, and technology stores (including the Bainaohui area), making it one of the busiest streets in Beijing. Unsurprisingly, traffic is often congested, especially near the nodal points Chaoyangmen and Dongdaqiao.

Chaoyangmen was originally called "Qihuamen". Chaoyangmenwai Street is the road to the Qiyangmen Gate during the Yuan Dynasty, the Chaoyangmen Guanxiang area during the Ming and Qing Dynasties and the Republic of China. During the Qing Dynasty the road was paved. In 1942 the road was repaved. After the founding of the People's Republic of China, the asphalt pavement was widened and refurbished in 1953. In 1988, a large-scale expansion and reconstruction was carried out. In 1990 the street was extended eastward to the East Third Ring Road and was connected to Chaoyang Road.[1]