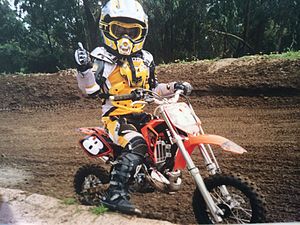 Angelos first dirt bike when she was 7 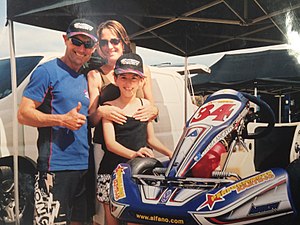 Angelos first go kart when she was 11

Angelo was born in Melbourne, Australia. Angelo got her first motorbike when she was six years old[2] and started racing at the age of eight.[3] After three years of motocross at Nunawading and Frankston tracks Angelo moved into karting at the age of 11.[4] 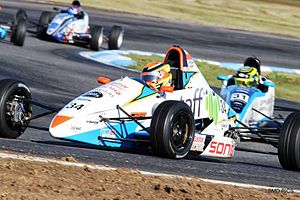 At age 15, Angelo began competing in club events at the Puckapunyal and then Todd Road circuits; she won a race in her Club Championships and was named Rookie of the Year. Whilst still in the Rookie class, Angelo entered her first Victorian Open title and qualified second in a field of 40 before moving up to the Junior National Light class the year after.

Angelo won a scholarship to attend the CAMS racing camp at the Australian Institute of Sport in Canberra.

Angelo won races in both Junior National Light and Junior Max classes. She was then selected as a participant in the Arrow Rewards Program. From here she moved into circuit competition in Formula Ford.[5]

In 2013, Angelo participated in her first full year of racing cars, competing in the Victorian Formula Ford Series as well as entering selected rounds of the Australian Formula Ford Championship. During the season she achieved a new lap record at the Phillip Island Grand Prix circuit. Her first race car win was at Sandown Raceway.

On 17 December 2013, Angelo had the opportunity to test a Dallara F307 - Mercedes-Benz with Australian Formula 3 entrant Team BRM. Angelo was the fastest among the rookies during her sessions.

In 2014, Angelo set a track record for a woman racer at the Bathurst circuit, winning the F3 National class race.[9]

On 25 June 2013, Angelo tested the Ozstaff Racing Dunlop Series FG Falcon at Winton Raceway. She completed 41 laps and achieved a best lap time of 1.25.89.[10] On 17 September 2013, Angelo had another drive of the V8 Supercar at the Ozstaff Racing ride day at Calder Park. She completed approximately 40 laps. Passengers were taken for rides and no times were taken. In 2014, she raced at Mount Panorama in a Dallara F307.[11]

In 2017, Angelo modeled race-related gamewear for Xbox Australia.[18] Although she did some test driving in China, she did not race that year.

In 2013, Angelo was chosen as a contestant of the reality TV show, Shannons Supercar Showdown.[21] The format of the show consisted of eight drivers, in two teams of four, competed for a test driver role with Ford Performance Racing in a series of challenges at Calder Park Raceway. The season was presented by Briony Ingerson. The two teams were called Team Davison and Team Winterbottom, named for the mentors of the two teams, Will Davison and Mark Winterbottom.

The series was televised over eight episodes from 14 September to 9 November of the 7mate channel in Australia.