Clinton Watts (known as Clint Watts) is a senior fellow at the Center for Cyber and Homeland Security at George Washington University and a Foreign Policy Research Institute fellow.[3] He previously was an infantry officer in the United States Army,[4][5] and was the Executive Officer of the Combating Terrorism Center at United States Military Academy at West Point (CTC).[6][7] He became a Special Agent for the Federal Bureau of Investigation where he served on the Joint Terrorism Task Force (JTTF).[1][8] He has consulted for the FBI Counterterrorism Division (CTD) and FBI National Security Branch (NSB).[9]

Watts has given expert testimony to the U.S. Congress multiple times, including: to the U.S. Senate Committee on Homeland Security and Governmental Affairs on April 5, 2016, about the ISIS November 2015 Paris attacks and the 2016 Brussels bombings,[10] to the U.S. House Committee on Foreign Affairs about ISIS after the 2016 Orlando nightclub shooting,[11] to the Senate Intelligence Committee about Russian interference in the 2016 U.S. elections in a widely reported March 30, 2017 public hearing,[12][13] and before the U.S. Senate Armed Services Subcommittee on Cybersecurity on April 27, 2017 about Russian black propaganda.[14][15]

His testimony before the Senate Intelligence Committee on Russian cyberwarfare tactics made multiple headlines,[12] with Slate calling him "Testifier Extraordinaire" and the star of the hearing.[2] Afterwards, CNN profiled him in a piece where they reported he himself was targeted by Russian information warfare after he documented Internet troll techniques.[1] His comment of "follow the trail of dead Russians" was seen as particularly noteworthy by CBS News, Salon, and The American Interest.[16][17][18]

Watts received a bachelor of science degree from the United States Military Academy.[19] Subsequently he garnered a master of arts after graduating from the Middlebury Institute of International Studies in 2005.[19][20]

Watts served in the United States Army as an officer in the infantry.[4][5][21] He was the Executive Officer of the Combating Terrorism Center at United States Military Academy at West Point (CTC).[6][22][7] After the September 11 attacks, he was recruited into the Federal Bureau of Investigation, to help coordinate efforts combating terrorism across multiple agencies.[23]

Watts worked as a Special Agent for the Federal Bureau of Investigation.[24][25][26] In this capacity he served on the Joint Terrorism Task Force (JTTF).[8][27][28] Watts has consulted for the FBI Counterterrorism Division (CTD) and FBI National Security Branch (NSB).[9] 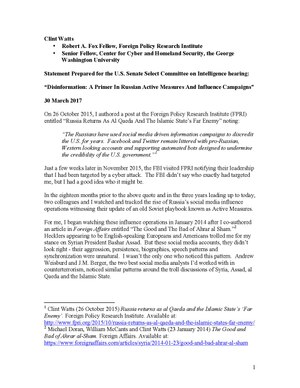 Watts testified as an expert witness about Russian interference in the 2016 U.S. elections, in a March 30, 2017 hearing before the Senate Intelligence Committee.[12][13]

Watts is a Foreign Policy Research Institute (FPRI) fellow.[29][30][31] He joined with FPRI in 2011,[1] and became its Robert A. Fox fellow in the FPRI initiative focusing on Middle East studies.[32][33][34] He is a senior fellow at the Center for Cyber and Homeland Security at George Washington University.[35][36][37] He does consulting work and teaches for police agencies, intelligence sources, and the military.[1][9]

Weisburd and Watts collaborated with colleague J. M. Berger and published a follow-up to their Daily Beast article in online magazine War on the Rocks, titled: "Trolling for Trump: How Russia is Trying to Destroy Our Democracy".[3][39] They researched 7,000 pro-Trump accounts over a two-and-a-half year period.[39] Their research detailed trolling techniques to denigrate critics of Russian activities in Syria, and proliferate lies about Clinton's health.[39] Watts said the propaganda targeted the alt-right, the right wing, and fascist groups.[3] After each presidential debate, thousands of Twitter bots used hashtag #Trumpwon to change perceptions.[40] In November 2016 the Foreign Policy Research Institute stated Russian propaganda exacerbated criticism of Clinton and support for Trump.[41][42] The strategy involved social media, paid Internet trolls, botnets, and websites in order to denigrate Clinton.[38][41][42]

Watts testified before the United States Senate Committee on Homeland Security and Governmental Affairs on April 5, 2016, about the Islamic State of Iraq and the Levant November 2015 Paris attacks and the 2016 Brussels bombings.[10] He submitted testimony to the United States House Committee on Foreign Affairs on June 23, 2016, on the subject of ISIS strategies, in the wake of the 2016 Orlando nightclub shooting.[11]

He testified as an expert witness about Russian interference in the 2016 United States elections, in a March 30, 2017 hearing before the United States Senate Select Committee on Intelligence.[12][13][43] His testimony before the Senate Intelligence Committee was well received, and made multiple headlines.[12][20] Slate referred to him in a headline as: "Clint Watts, Testifier Extraordinaire", and "The star of March’s Senate Intelligence Committee hearing".[2] CNN profiled him after the testimony in a piece "Russia investigation: Who is Clint Watts", where it was noted he gained knowledge in the field of Russian cyber hacking methods, after himself being a target in 2015 following his "Trolling for Trump" article; the FBI notified the Foreign Policy Research Institute of the attack.[1] Salon compared his testimony "follow the trail of dead Russians" to John Dean's statement about "a cancer on the presidency".[17] This phrase in testimony by Watts was highlighted by the media, including CBS News,[16] The American Interest,[18] and The Oregonian.[44] U.S. Senator Ron Wyden found the comment important to his investigation.[45] Mark Shields of PBS NewsHour found his testimony "compelling",[46] and CNN called it "blistering".[47] Jennifer Rubin wrote for The Washington Post that his testimony "laid out the most comprehensive look at the array of tools Russia used to influence our election".[48] After his testimony, he appeared on NBC's Meet the Press and explained ways the U.S. can better respond to cyberwarfare.[25][33]

He appeared before the United States Senate Armed Services Subcommittee on Cybersecurity on April 27, 2017 on the subject of cyber warfare and national security, where he spoke on strategies by Russia using black propaganda.[14][15][49]

Others articles of the Topics Intelligence AND United States : TrumpiLeaks

Others articles of the Topic Intelligence : TrumpiLeaks

Others articles of the Topic United States : North Korea–United States proxy conflict, Optimus Primal, Vehicle registration plates of the United States for 1902, Primary statistical area, Kansas City, Missouri, Charles Fuselier, The Portland Black Panthers: Empowering Albina and Remaking a City
Some use of "" in your query was not closed by a matching "".