Asturias de Puebla was a former football club that played in the Puebla City, the club was founded in 1919 in its majority by a local businessman Manuel Hill. The club was one of the pioneers in the development of football in the City and State of Puebla. The club folded in 1943 a year before the Mexican professional football league was established in Mexico. 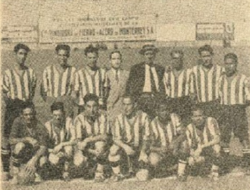 Club Asturias in Mexico , taking part of the Parque Asturias inauguration in 1936.

The club was founded in 1919 by local businessmen Manuel Hill father of Jose Hill who played for local puebla football Club Espana. Club was founded and backed by a noticeable economic support similar to Club Espana, who at the time was the team to beat in the state of Puebla. During the clubs first years it signed former Club Espana players, none more memorable than Julian Ruiz. It didn't take long for the club to win its titles, winning the league a couple of times in its first years as well as traveling outside the state to play friendly cup matches. In 1936 the club was invited to take part of the Parque Asturias inauguration in Mexico City. The club took part in one of many games played that day against the Seleccion del DF. In 1937 the club travels to Guadalajara to play an inter state champion game against the Selección Jalisco after winning the 1937 Puebla state league. In 1939 the club travels to Veracruz to play an inter state championship match against U.D. Moctezuma de Orizaba.

Going into the 1940s coming from winning back to back league titles Asturias arch rival España de Puebla folds due to economical reasons , Club Espana decides to join forces with Clu Asturias with the lingering talk of a nation wide professional league begging talks in Mexico City .Under the owner ship of Manuel Hill and the newly associated Espana resources , the clubs dominates the local league till it folds in the early 1940s and tours the country playing against the best teams each state has to offer . It was up till 1944 a year after the first professional league in Mexico was established that Laureano Alvarez ex president of Club Espana and various ex players and Owners of club Asturias decide to formally establish Puebla F.C. , a new club to come together into professional football .

Retrieved from "https://en.everybodywiki.com/index.php?title=Club_Asturias_de_Puebla&oldid=875526"
Category:
Hidden categories:
This page was last edited on 20 July 2020, at 17:38.
Content is available under License CC BY-SA 3.0 unless otherwise noted.
This page has been accessed 514 times.
Privacy policy
About EverybodyWiki Bios & Wiki
Disclaimers