Crooked Billet, also known as Shepherd's Hatch Gate,[upper-alpha 1] is a hamlet — part of Wimbledon Common and incorporates its own commons. The district encompasses a small area in southwest London, England, in the London Borough of Merton. The area is regarded as a popular greenspot, a respite from smog and congestion, and an adjunct to events in Wimbledon.

Crooked Billet is the location for some of southwest London's most expensive property given its proximity to Wimbledon Common and the King's College School.[1] This small corner of Wimbledon Common has a green field, residential housing, and two public houses.[2][3] Notwithstanding the surrounding developed environs, it has maintained its core "identity as a semi-rural enclave." Formerly, it encompassed grazing land, cottages and farm buildings which harken back to at least the 17th century. Currently, the public houses host various events, and the Wimbledon Morrismen perform there. A 1617 survey calls it "Shepherd's Hatch Gate" which refers to gates for grazing livestock.[1] Richard Atkins cultivated field near the Ridgeway.[1]

It is a small, rather obscure area[1][4] in the southwest corner of Wimbledon Common. One theory is that it is named after the Crooked Billet pub[5][upper-alpha 2] which was first mentioned in 1509.[1] Both the pub and the area are well regarded.[9][10][11][12] Along with the Hand in Hand pub, it faces onto a small triangular green. Nearby can be found King's College School.[upper-alpha 3] Eagle House and Wimbledon House are also in the vicinity.[14] 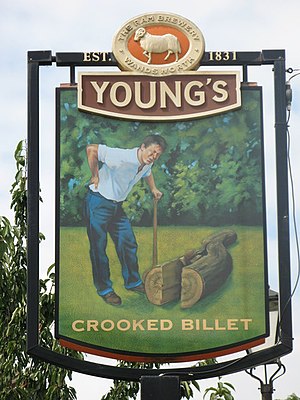 After his son died in the Great Plague of London, Robert Pennington, a friend of Charles II, built Southside House (on nearby Woodhayes Road) as a safe haven for his family.[5]

In the 1770s, the "Cinque Cottages" were built on the green, perhaps as an illegal encroachment.[5]

In the 1820s, Gothic House (later renamed Gothic Lodge) was home to novelist Captain Frederick Marryat in the 1820s. In 1874 it became the home of engineer Sir William Preece[upper-alpha 4] who permitted use of his garden by Guglielmo Marconi to position a radio transmitter "used to send some of the earliest telegraph messages." It was London's first house with electricity for illumination, boiling and ironing, and a telephone.[1]

In the 1860s Earl Spencer was Lord of the Manor, and owner of Wimbledon Common. His stated intent to enclose the common land before selling it for building development led to the passage of the Wimbledon and Putney Commons Act of 1871.[15] Consequently, the land is preserved as a commons and saved "for the public in perpetuity." A Board of Conservators manages the property.[1]

In 1872, Sir Henry Peek of Wimbledon House, Parkside, constructed the "Cinque Cottages" which displaced the earlier cottages. The deed of trust provides for the beneficiaries to be "poor men of good character in needy circumstances" 54 years old or older who resided within one of Surrey's 40 parishes. Sir Henry Peek played a signal role in passing the Commons Act.[upper-alpha 5] He was a Member of Parliament for East Surrey from 1868[1] until 1884.[16]

In 1888 Young's Brewery leased the Crooked Billet pub, and bought the freehold in 1928. In 1974 Young's purchased the Hand in Hand. After the pubs were enlarged and refurbished, they were sold in 2006.[17][18] The pubs are separated from the green. In Wright's Alley, Shire horses historically pulled brewer's drays delivering ale to customers."[1]