Daphné Bürki was born on the lawn of a hospital in the 14th arrondissement of Paris[4] to Hubert de Marin de Montmarin and Catherine Maeght.[1] She is a descendant of François Louis Alfred Durrieu and Pierre-Étienne de Marin of Montmarin.[5]

A former student of Beaux-Arts[6] and the Fleuri-Delaporte fashion school,[7] she began her career as a stylist at Dior alongside John Galliano.[8][9]

Daphné Bürki, reporting for L'Édition spéciale, during the pumps race held in Paris on 21 November 2008.

Daphné Bürki took her first steps on television on Canal+ as a trendsetter and fashion columnist in shows Nous ne sommes pas des anges with Maïtena Biraben then La Matinale with Bruce Toussaint.[9]

From September 2008, she is a columnist on L'Édition spéciale and presents the "trend objects" and the "must-have" of fashion.

In 2011, she left Canal+ for France 5, where she presented, from September, the programme Les Maternelles.[13] Starting in the spring of 2012, always on France 5, she replaces Alessandra Sublet, notably during her maternity leave, at presenting C à vous.[14]

In September 2012, recalled by Ronan Autret,[15] she left France 5 to return to Canal+, where she joined the team of the Grand Journal.[16]

In September 2017, she arrived on France 2, at the presentation of a new afternoon programme.[18]

Until 2012, Daphné Bürki wrote a weekly column in Be magazine.[6] 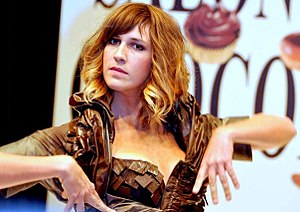 In 2008, Daphné Bürki played Bérengère in Love Me No More by Jean Becker.

In 2010, she plays under the direction of Rémi Bezançon in A Happy Event alongside Louise Bourgoin and Josiane Balasko.

In 2012, she is part of the cast of David et Madame Hansen of Alexandre Astier with Isabelle Adjani.

In 2014, she was part of the cast of Cécile Telerman's Les Yeux jaunes des crocodiles, where she played herself.

In 2010, Daphné Bürki participates in a set of spots for the Femibion brand, entitled "The 25th hour of Daphne Burkï", intended for "active mums".[19] She was also the muse of a publicity campaign of the lingerie brand Dim,[10] entitled "The stunning fashion lessons of Daphne Bürki".[20]

In 2011, she participated in a Nesfluid advertising campaign, in the form of a web series.[21] The same year, she is the godmother of the "Big fashion braderie", organized by the association AIDES.[22] In June, she is the personality who officially launches the summer sales at Galeries Lafayette.[23]

In 2016, she participated in the programme Les Recettes Pompettes with Monsieur Poulpe.

Share
Retrieved from "https://en.everybodywiki.com/index.php?title=Daphné_Bürki&oldid=1006589"
Categories:
Hidden categories:
This page was last edited on 15 September 2020, at 15:55.
Content is available under License CC BY-SA 3.0 unless otherwise noted.
This page has been accessed 1,129 times.
Privacy policy
About EverybodyWiki Bios & Wiki
Disclaimers