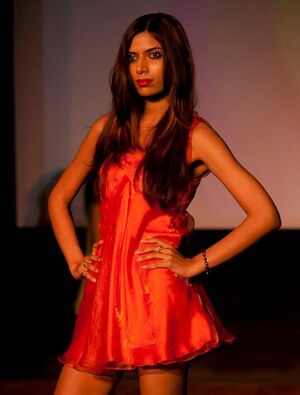 Delilah Alvares at a Fashion Show

Delilah Judy Alvares is a Kuwaiti-British actress, model and author best known for her work in New York and India[1]

Born in Al-Sabah, Kuwait, she grew up between Kuwait and England[2] Both her parents worked at the Kuwait International Airport. Her mother worked for Cyprus Airways and her father for British Airways[1]

She was just a child when her mother passed away, after which her father re-married and gave up her custody. She was then adopted by her mother's sister, a film and theater producer,[3] who gave her a connection her to India from where her career took flight[4]Alvares has long been working in the same entertainment industry as her adoptive parent but independently carved out her own path[3]

She moved to New York for a short period of time before she moved back to England.[5]

Alvares started an early acting career with theater and soon grew into an award winning stage actress and script writer.[3] She has been a part of multiple stage dramas before moving into films and television[6] She became known after her role in the movie Expect the Unexpected (2011)[3] Years later she made her return back to theater[1]

As a fashion model, her work stands out with several fashion designers and fashion photographers all around the world[8] Her fashion style trended a couple of times in 2021[8] She has worked with many brands over the years but has been signed with L'Oreal (Hair) for several years[8]

Retrieved from "https://en.everybodywiki.com/index.php?title=Delilah_Alvares&oldid=2332086"
Hidden categories:
This page was last edited on 19 February 2022, at 19:46.
Content is available under License CC BY-SA 3.0 unless otherwise noted.
This page has been accessed 162 times.
Privacy policy
About EverybodyWiki Bios & Wiki
Disclaimers