Doge (often /ˈdoʊdʒ/ DOHJ, /ˈdoʊɡ/ DOHG)[2] is an Internet meme that became popular in 2013. The meme typically consists of a picture of a Shiba Inu dog accompanied by multicolored text in Comic Sans font in the foreground. The text, representing a kind of internal monologue, is deliberately written in a form of broken English.[1]

The meme is based on a 2010 photograph, and became popular in late 2013, being named as Know Your Meme's "top meme" of that year. A cryptocurrency based on Doge, the Dogecoin, was launched in December 2013, and the Shiba Inu has been featured on Josh Wise's NASCAR car as part of a sponsorship deal. Doge has also been referenced by members of the United States Congress, a safety video for Delta Air Lines, a Google Easter egg, and the video for the song "Word Crimes" by "Weird Al" Yankovic.

Doge uses two-word phrases in which the first word is almost always one of five modifiers ("so", "such", "many", "much", and "very"), and the departure from correct English is to use the modifier with a word that it cannot properly modify.[3] For example, "Much respect. So noble." uses the doge modifiers but is not "proper" doge because the modifiers are used in a formally correct fashion; the doge version would be "Much noble, so respect."[3] In addition to these phrases, a doge utterance often ends with a single word, most often "wow" but with "amaze" and "excite" also being used.[3]

Kabosu (Japanese: かぼす), the female Shiba Inu featured in the original meme, was a pedigree puppy who was sent to an animal shelter when her puppy mill shut down. She was adopted in 2008 by Japanese kindergarten teacher Atsuko Satō, and named after the citrus fruit kabosu because Sato thought she had a round face like the fruit.[4] Another Shiba Inu featured in the meme is Suki, a female belonging to photographer Jonathan Fleming from San Francisco. His wife had accidentally put a scarf in the wash, making it shrink. He took a photograph of Suki wearing the scarf outside on a cold night in February 2010.[5]

Kabosu was first pictured in a 2010 blog post by Sato; afterwards, variations of the pictures using overlaid Comic Sans text were posted from a Tumblr blog, Shiba Confessions.[5][6][7][8] However, the use of the intentionally misspelled "doge" dates back to June 2005, when it was mentioned in an episode of Homestar Runner's puppet series.[2] 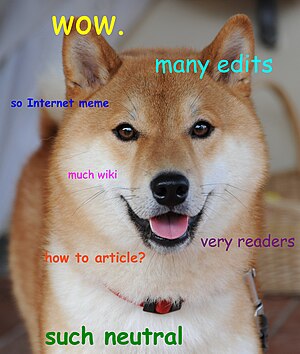 In August 2013, images of the meme were spammed on Reddit's r/MURICA subreddit by 4chan's random imageboard, /b/.[9] Online searches for the meme began to increase in July 2013.[5] Google later created a Doge Easter egg: when doge meme was entered into the YouTube search bar, all the site's text would be displayed in colorful Comic Sans, similar to the kind used by the meme.[10]

In late December 2013, members of the U.S. Congress produced material in the meme's style. The Huffington Post commented that Doge was "killed" because of the Congress members' usage of the meme.[14][15]

In December 2013, the Dogecoin was introduced as a new cryptocurrency, making it the first cryptocurrency to be based on an Internet meme;[16][17][18][19] the viral phenomenon, along with usage of the Comic Sans MS typeface, gave it "the Internet density of a large star" according to Medium writer Quinn Norton.[20] By early 2014, Doge's popularity was sustained by internet communities on social media, accompanied by the rapid growth and acceptance of Dogecoin. In April 2014, Doge experienced a second major media resurgence due to revelations of the Dogecoin community's intent to sponsor Josh Wise in NASCAR and place a picture of the Shiba Inu on his vehicle.[21][22] The car features in downloadable content for the video game NASCAR '14.[23] Media outlets have embraced the meme while reporting on the cryptocurrency and the car, with titles featuring phrases such as "so wow" and "very vroom".[24][25]

In mid-2014, the advertisement agency DDB Stockholm had Doge feature prominently in an advertising campaign for the public transport company SL in Stockholm, Sweden. The advertisement concerned the company's special summer tickets, and featured Doge holding a public transport ticket in his mouth, with phrases such as "many summer", "such cheap" and "very buy".[28] Doge was also one of 25 Internet memes featured in a Delta Air Lines safety video released in May 2015.[29] In the video for "Weird Al" Yankovic's 2014 song "Word Crimes", a song about bad grammar, a Doge tweet is used to illustrate the types of bad grammar referenced in that part of the song.[30]

"Doge" was one of several additions to Dictionary.com in November 2015.[31] The website defines it as not just the image macro and its variants, but also the form of "language" that it utilizes.[32]

The Japanese perception is remarkably different; Satō and Kabosu are rather known as a pet and owner rather than a meme, and her blog is the fourth-most popular pet-related blog in the country as of December 2013. Reacting to the meme, she explained, "To be honest, some pictures are strange for me, but it's still funny! I’m very impressed with their skills and taste. Around me, nobody knows about the doge meme. Maybe I don't understand memes very well, because I'm living a such an analog life." Satō has also expressed that she had learned that "the risk of the internet is that anyone in the world can see my life on my blog". Fleming stated that in his experience, the Shiba Inu breed has become more recognised due to the meme.[5]

In the 2015 video game The Legend of Zelda: Tri Force Heroes, a reference to the meme can be found in the North American version only. When examining one of the ancient bookshelves, the text reads "Still, coming here has at least afforded me the rare chance to explore these ancient ruins. So ancient. Such ruin." The reference was met with mixed views from fans of the series.[33][34]

Others articles of the Topics Internet AND Dogs : Walter (meme)

Share
Retrieved from "https://en.everybodywiki.com/index.php?title=Doge_(meme)&oldid=215688"
Categories:
Hidden categories:
This page was last edited on 10 November 2018, at 16:43.
Content is available under License CC BY-SA 3.0 unless otherwise noted.
This page has been accessed 1,668 times.
Privacy policy
About EverybodyWiki Bios & Wiki
Disclaimers