Donald Malarkey was born in Astoria, Oregon, on July 31, 1921,[1] to Leo and Helen (née Trask) Malarkey,[3]:12, 17 married in 1918. He graduated from Astoria High School in 1939.[3]:23 As a youth, he worked on a purse seiner crew on the Columbia River.[3]:70 He was a volunteer firefighter during the destructive Tillamook Burn forest fire, which destroyed thousands of acres of Oregon timber.[3]:255 He was in his first semester at the University of Oregon in the fall of 1941 when the Japanese attacked Pearl Harbor.[3]:25

After Pearl Harbor, Malarkey tried enlisting in the Marines, but was rejected because of dental problems. He then tried the Army Air Corps, but lacked the requisite mathematics background. As such, when he was drafted in July 1942, he volunteered for the paratroops of the United States Army, after reading a Life magazine article about them being the best.[3]:29–30, 281 He trained at Camp Toccoa, Georgia. Of the enlisted men who trained at Toccoa, only one man in six received certification as a member of the fledgling paratroops. He received his jump certification in 1942.[3]:36

He became a member of E ("Easy") Company, 2nd Battalion, 506th Parachute Infantry Regiment of the 101st Airborne Division. He went to England in 1944 to participate in Mission Albany, the airborne landing portion of Operation Neptune, the largest amphibious invasion in history, which was the assault portion of Operation Overlord.[3]:64 Malarkey parachuted into France with his unit. Later that day, in a pitched battle, he helped knock out four German 105 mm artillery battery, an action now called the Brécourt Manor Assault, for which he received the Bronze Star for his heroism. 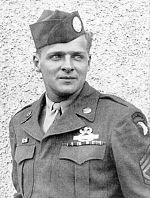 He fought for twenty-three days in Normandy, nearly eighty in the Netherlands, thirty-nine in the Battle of Bastogne in Belgium, and nearly thirty more in and around Haguenau, France, and the Ruhr Pocket in Germany. He was promoted to sergeant before Operation Market Garden. Malarkey, who was never seriously wounded, served more consecutive time on the front lines than any other member of Easy Company. Malarkey was awarded the Bronze Star, Purple Heart, Good Conduct Medal, American Campaign Medal, and others.

Malarkey returned to the University of Oregon in 1946 to complete his degree. He was a member of the Sigma Nu fraternity (Gamma Zeta).[3]:234 While attending the university, he met and became engaged to Irene Moor (1926–2006) of Portland.[3]:234–236 They were married on 19 June 1948.[3]:236 Malarkey graduated in 1949 with a bachelor's degree in business.[3]:26 The couple lived in Astoria, Oregon, where Malarkey became the sales manager for Lovell Auto Company. During this time, he ran for the position of County Commissioner of Clatsop County, Oregon, and was elected in 1954.[3]:237 The family moved to Portland, Oregon, where Malarkey worked as an insurance and real estate agent.[3]:237

In 1987, Malarkey was introduced to author and University of New Orleans Professor of History Stephen Ambrose at an Easy Company reunion in New Orleans. In 1989, Malarkey traveled with Ambrose and other members of Easy Company, including Richard Winters and Carwood Lipton, to various sites where they had fought in Europe.[3]:252 The oral history and first-person recollections that Malarkey and the others provided became the basis for Ambrose's book Band of Brothers, which was published in 1992. During Ambrose's collection of anecdotal information for the book, Malarkey told of the saga of the Niland brothers of Tonawanda, New York, how two had died on D-Day and another was presumed killed.[3]:250 Fritz, one of the four Niland brothers, was close friends with Malarkey's best friend and fellow Easy Company member Sergeant Warren H. "Skip" Muck who was from the same town as the Nilands. This episode was the impetus for the screenplay of Saving Private Ryan.[3]:110

Malarkey lived in Salem, Oregon, and formerly spoke extensively to high school and college students and other groups on his Easy Company experiences. He traveled with the USO to Army posts and hospitals in the United States and Europe, where he met with soldiers wounded in the Iraq War. In 2005, he appeared in an advertisement urging repeal of the estate tax. For many years Malarkey extensively traveled with his friend Vance Day, who is a circuit court judge in Oregon and a former trial attorney and chairman for the Oregon Republican Party. Together they have done many leadership seminars through Day's Frontline Leadership by On-Point Strategies. Following its premiere in August 2010, the two also held events around a new documentary titled The Battle at Brecourt Manor (Brecourt Manor Assault) executive produced by Day according to the group's promotional manager Justin Alderman.[4] The group and documentary project operated a website at http://www.brecourtmanor.net which was archived in August 2011. In 2012, Malarkey retired from public speaking events.

Following the death of Sergeant Paul Rogers on March 16, 2015, Malarkey became the oldest surviving member of Easy Company. Malarkey died on September 30, 2017 of age related causes. [2] He was interred at Willamette National Cemetery.[1]

Other articles of the topic World War II : Clancy Lyall, Norman Dike, Paul Rogers (soldier), Frank Perconte, Robert Burr Smith, Robert H. Bolton, Willis Ricketts
Some use of "" in your query was not closed by a matching "".