Bárbara Giménez Weinbaum is an Argentine-Spanish designer who lives and works in Leipzig, Germany.

Born in 1977 (Buenos Aires, Argentina), Bárbara completed her studies at Madrid School of Architecture in 2003. After holding several positions in international planning offices, she moved to Germany in 2006 and founded a publishing house for home magazines. Besides her work as a publisher, Bárbara has devoted herself to establishing an interior design label: WEINBAUMS. Giménez Weinbaum focuses on careful redefinitions of contemporary design classics. Her elegant two-seater "Butterfly Twin Chair" received the distinguished red dot design award in March 2013. In addition, WEINBAUMS was nominated for the German Design Award in 2015 and received the A' Design Award in 2017.[1] [2] [3] 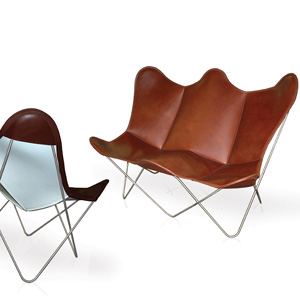 Bárbara Giménez Weinbaum has reinterpreted one of the most influential design classics of the 20th century. Weinbaum has expanded the sculptural forms of the Hardoy Butterfly Chair and translated them into a sofa. Based on the draft by Bonet, Kurchan and Ferrari-Hardoy, the resulting two-seater picks up the harmonious geometry of the original design and offers seating comfort. It is a timeless eye-catcher and aesthetic sofa in one.

The Butterfly Twin Chair was awarded in March 2013 for high design quality with the renowned red dot award. In particular, the careful reinterpretation of one of the 20th century’s most influential design classics helped winning over the 37-member jury of experts.

Article from midcenturyhome.com on the origins of the Hardoy Butterfly Chair and the Butterfly Twin Chair (English)

Press release in El Confidencial about the deisgner (Spanish)