Eanugu Ravinder Reddy was born on 5th April 1965 in Errapahad village, Thadwari Mandal of Nizamabad District. He is one of the Indian Politicians who fought for separate Telangana state and known for his consistent ruling as MLA from 2004 to present. In his 13 years of power he lost in By-elections held in 2008 which restricted his ruling for 8 months i.e from September 2008 to April 2009. He resumed his power from may 2009 in the same Yellareddy constituency as MLA under TRS party (Telangana Rashtra Samithi).. 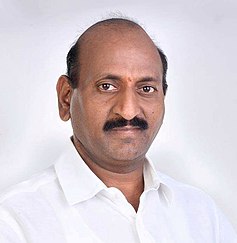 He was an active participant in Telangana agitation since the establishment of Telangana Rastra Samithi(TRS) party. In his journey of fighting for independent Telangana state, he resigned twice from MLA position. In the subsequent By-election held in 2010 he won with an immense majority of 36,513 votes. His contribution in achieving separate Telangana state helped him in building reputation for nominated multiple times as MLA from the same constituency.

His participated in 5 elections. The data as follows:

Ravinder Reddy was born on 5th April 1965 to Eanugu Raji Reddy and brought up in the yerrapahad village in Nizamabad district. He completed B.sc (Degree) from Osmania University and SITC from Gandhi Medical College, Hyderabad. He was married to Manjula Reddy and have two children son Eanugu Nikhil Reddy and daughter Eanugu Vaishnavi Reddy.

Share
Retrieved from "https://en.everybodywiki.com/index.php?title=Eanugu_Ravinder_Reddy&oldid=885340"
This page was last edited on 23 July 2020, at 04:53.
Content is available under License CC BY-SA 3.0 unless otherwise noted.
This page has been accessed 4,218 times.
Privacy policy
About EverybodyWiki Bios & Wiki
Disclaimers