Edward "Eddie" Fatscher IV (born May 1, 2002) is an American professional stock car racing driver. He most recently competed part-time in the ARCA Menards Series in 2018, driving the No. 55 and No. 20 Toyotas for Venturini Motorsports. 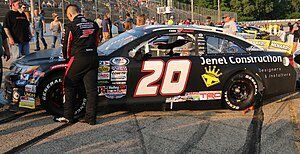 Fatscher standing next to his No. 20 car at Madison before the race.

Fatscher began racing go-karts at his home track of Riverhead Raceway on Long Island. He continued to compete in several go-kart series, including Bandoleros, INEX Legends, Thunder Roadsters and Legends Dirt Modified cars, winning multiple races and championships in the state of New York and at the World Karting Association Nationals in Pennsylvania at Beverrun. Fatscher also raced at Charlotte Motor Speedway in 2014 in the winter and summer series, finishing first and fourth in points, respectively.[1] In 2017, he competed in events in both the CARS Series and the PASS Series, which included the Icebreaker at Thompson Speedway[2], where he finished second. Later that year, he also ran the Snowflake 100 at Five Flags, a race which is held before the Snowball Derby.[3]

His debut in the ARCA Series came at Toledo in the part-time No. 55 car for Venturini Motorsports.[4] His second start came at Madison in Venturini's full-time No. 20 car.[5] He returned to the No. 55 for his third and final race of the season at Elko.[6]

Fatscher was without a ride for all of 2019, and did not run any races in ARCA or another racing series.

Fatscher lives in East Northport, New York, which is on Long Island. According to pictures on his website, he attends Elwood-John H. Glenn High School where he plays on the school's football and lacrosse teams, and is also an honors student at the school.[7]

Retrieved from "https://en.everybodywiki.com/index.php?title=Eddie_Fatscher&oldid=658254"
Categories:
Hidden categories:
This page was last edited on 4 April 2020, at 01:44.
This page has been accessed 226 times.
Content is available under License CC BY-SA 3.0 unless otherwise noted.
Privacy policy
About EverybodyWiki Bios & Wiki
Disclaimers