Ednör – L'Attaque is a steel inverted roller coaster at La Ronde in Montreal, Quebec, Canada. Built by Vekoma, it is a standard Suspended Looping Coaster (SLC).

This ride originally opened on May 29, 1999 at Six Flags AstroWorld under the name Serial Thriller. It replaced the popular Excalibur coaster. It was also the last coasters to be added to the park before its demolition. The ride closed along with the rest of the park at the end of the operating season on October 30, 2005.[1]

The ride was dismantled and moved to Great Escape in Queensbury, New York between late 2005 and 2009 where it laid in storage. 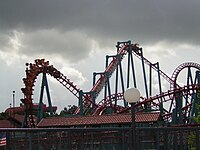 Ednör – L'Attaque when it was known as Serial Thriller at AstroWorld

In September 2009, the parts of Serial Thriller were removed from storage at The Great Escape and were shipped off to La Ronde in Montreal, Quebec, Canada, where they were displayed in the entrance area.

Between February and April 2010, it was installed over the Lac des Dauphins where it has since operated.

On April 15, 2010, La Ronde announced that the new name for the ride would be Ednör – L'Attaque, based on a fictional sea monster appearance in the Lac des Dauphins. The name comes from the word Ronde spelled backwards. It features a pre-show that talks about various sea monsters around the world. The ride features special effects from the monster itself, such as a misty area surrounding the ride.

Share
Retrieved from "https://en.everybodywiki.com/index.php?title=Ednör_–_L%27Attaque&oldid=2242549"
Categories:
Hidden categories:
This page was last edited on 4 January 2022, at 14:37.
Content is available under License CC BY-SA 3.0 unless otherwise noted.
This page has been accessed 79 times.
Privacy policy
About EverybodyWiki Bios & Wiki
Disclaimers