Eta Phi Zeta (ΗΦΖ) is a Puerto Rican Sorority and non profit organization commonly known as ¨Las Etas¨ established on March 12, 1969 in the town of Arecibo, Puerto Rico[1] This sorority is one of the few that still active in the island and has more than 4,000 sorority sisters all around Puerto Rico and Florida. It has Almuni and University Chapters in Puerto Rico.

The sorority was established in the University of Puerto Rico at Arecibo campus on March 12, 1969.[1] The Chapter at the university was called Alpha Chapter and was founded by 9 unversity students at the campus. The first Alpha sisters were Lilliam Davila, Zulma Velazquez, Argelia Garcia, Awilda Matos, Silda Alvarez, Lucy Ramirez, Matilde Milet, Florez Galarza and Lillian Rodriguez. They used the constitution of the Phi Zeta Chi fraternity untill August 9, 1970 was aproved.[2] This constitution was amended and verified on November 17, 1973. On October 12, 1979 at the first Assembly in Arecibo, Puerto Rico the constitution was amended and adjusted to the sorority and aproved by Unanimity. By the year of 1970 the Beta chapter was established at the Interamerican University of Puerto Rico San Germán Campus lead by one of the founders Awilda Matos. 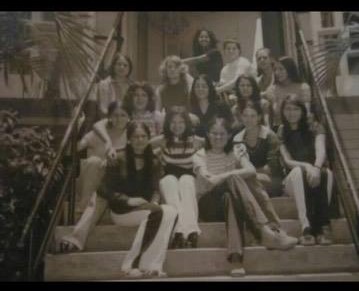 Founders of the Beta Chapter.

This chapter was made with the purpose to recognize the past great female presidents that have taken the reins of this organization for the past decades. This golden chapter marks an important part of the history and development of the organization Eta Phi Zeta Sorority Inc.[3]

Retrieved from "https://en.everybodywiki.com/index.php?title=Eta_Phi_Zeta_Sorority&oldid=888193"
Hidden categories:
This page was last edited on 23 July 2020, at 23:40.
This page has been accessed 1,006 times.
Content is available under License CC BY-SA 3.0 unless otherwise noted.
Privacy policy
About EverybodyWiki Bios & Wiki
Disclaimers