Faez Naqawah (Arabic: فائز نقاوه‎; 30 July 1995) is a Syrian-born businessman, known for his lavish lifestyle, and being one of the youngest in the defense sector.[1][2]

Naqawah was born in Damascus, to Rashad Naqawah, who is a petroleum and energy magnate.[3] Having an interest and keen towards his family’s business, he succeeded himself to keep the legacy of his family business GNZ Energy Limited (which is working on renewable energies) and later gained professional business experience. After making himself able to stand his own business, he is today creating and directing his own way of earning and path by serving a lot of people in defense sector which is directly or indirectly a great source of income for many people working for the company, through CON Technologies Limited.[4]

Naqawah was educated at Brummana High School in Brummana, Lebanon, and the British universities Middlesex University, London School of Economics, and University of South Wales.

Similarly, believing on his own caliber and proficient qualities, he now works with CON Technologies Limited, which is a Defence firm that is based in London, United Kingdom owning many subsidiaries which are specialized in defense, security and military equipments. The company has strong and powerful collaborations with organizations to set up its products.

In his very younger age and in short span of his professional career, Naqaweh has achieved a lot of new milestones for the company and is now successful to get managed to provide the company and its subsidiaries a stability and its running.[2][5]

CON Technologies worked with Devtac Japan to improve their research and development department back in 2017. They now own 50% shares of Devtac Japan and shows a promising future with an increase in sales. Currently, CON Technologies is working to upgrade the existing Devtac Ronin Ballistic Helmet from NIJ Level 2 to NIJ Level 3.

They jointly manufacture the Ronin Kevlar Level 3A Tactical Ballistic Helmet, which provides a 160° field of vision and has the capability to stop a 44 magnum bullet. The developers of this product quoted that it has been tested by some special operation units such as the SWAT teams. 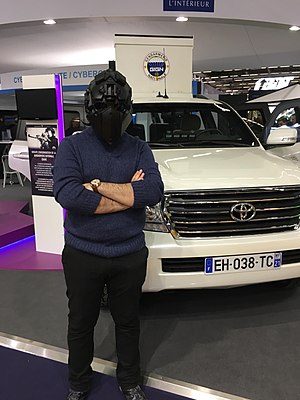 Faez Naqawah wearing the ballistic helmet back at Milipol Paris 2017.

Although the Ballistic Helmet looks similar to an Airsoft mask, it is actually provides NIJ Level 3A protection. The helmet weights about 4.85 pounds.It is made of Kevlar and neodymium magnets are used to hold 7 mm additional cheek panels in place. The purpose of the magnets is to help the user to separate one of the cheek plates.The Picatinny rails on the helmet sides are used to attach equipment such as flashlights. The lenses are also replaceable. A custom system helps to prevent the lenses from blurring. CON Technologies is working closely to improve the safety features of this helmet in order to upgrade it to a better version.[5]