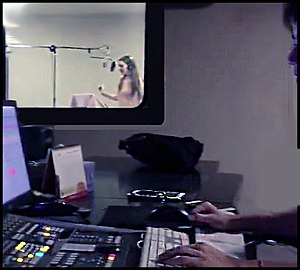 To accommodate the film's distinct technological aspects, a customized device known as "HOMI" accompanied by VR "viewers" were designed by Chae. HOMI is described as a moveable, 'chair-like' apparatus which provides what has been described as a "rollercoaster-like experience of interactive story-telling" for moviegoers. Chae's roles and contributions include VR narrative, motion design, script, casting, film and dubbing direction.[3]

Production officials described the movie as a combination of live-action stereoscopic 3D and real-time rendering technique.[4]

Following numerous showings at exhibitions and festivals, including the 21st Bucheon International Fantastic Film Festival and The 2017 VR Summit, the film was selected for screening at the 2018 Cannes Film Festival in the VR genre[5][6][7][8][9][10]

The total run-time is 10 minutes, providing a "movement and virtual world" experience to filmgoers.[11]

Using VR motifs inspired by Ruiz Carroll's 'Alice in Wonderland' in design and theme, Korean actress Jung Da-bin (known for her appearance as "The Baskin-Robbins Ice cream girl") portrays the Korean character (An huisu); a young girl who occasionally engages in 'breaking the fourth wall' technique to share her thoughts. Akin to Carroll's "Alice" , An Huisu finds herself suddenly shrinking, and is transported into a world of wonders where she experiences and shares an internal journey.

The first English language viewing will be shown at the Cannes Film Festival, whereas the Korean language format is commonly used for exhibition in Korea with exception to globally targeted events.[9]

Retrieved from "https://en.everybodywiki.com/index.php?title=Follow_the_White_Rabbit_(VR_Film)&oldid=891311"
Category:
Hidden category:
This page was last edited on 24 July 2020, at 18:27.
This page has been accessed 293 times.
Content is available under License CC BY-SA 3.0 unless otherwise noted.
Privacy policy
About EverybodyWiki Bios & Wiki
Disclaimers
Mobile view