From EverybodyWiki Bios & Wiki
Jump to:navigation, search
This article is about games played with the hands. For other uses, see Hand game (disambiguation). 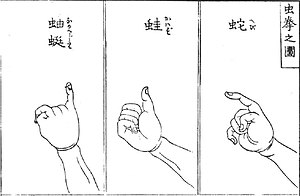 Hand games are games played using only the hands of the players:

Less strictly, the following may be considered hand games:

These three were added but are most likely variations of Pat-a-cake.

This article "Hand game" is from Wikipedia. The list of its authors can be seen in its historical and/or the page Edithistory:Hand game. Articles copied from Draft Namespace on Wikipedia could be seen on the Draft Namespace of Wikipedia and not main one.

Share
Retrieved from "https://en.everybodywiki.com/index.php?title=Hand_game&oldid=1751311"
Categories:
Hidden category:
This page was last edited on 1 June 2021, at 16:29.
Content is available under License CC BY-SA 3.0 unless otherwise noted.
This page has been accessed 105 times.
Privacy policy
About EverybodyWiki Bios & Wiki
Disclaimers