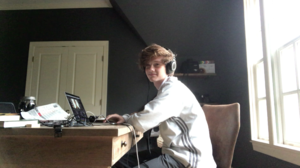 Harrison Fuller in his home.

Harrison Fuller (born October 1, 2002) is an American Screenwriter, Director and Cinematographer, born in Atlanta, GA. He is best known for his dramatic and comedic work in shorts like Sentiment and Cloudy Tuesday, and his web series Icy Bois.

Fuller got his start creating a short segment called Pop Culture for his elementary school's television program. He attended Trinity School in Atlanta, GA, and soon after enrolled in Holy Innocents' Episcopal School in Sandy Springs, GA. During his time at this school, his filmography has extended to over 10 Credits.

Fuller got his start making short films for an entry to a local film festival. The short was 2 minutes long and starred his schoolmates. Soon after, for the same annual festival, he entered a short titled Sentiment, starring Kaelan Kelly and Jack Joyce. This short film amassed awards from numerous festivals, including The Catalina Film Festival, the All-American High School Film Festival, the St. Albans' Film Festival, and The Orlando Film Festival.

Harrison currently lives in Atlanta, GA, with his family. Not much else is known about his personal life.