Kadasa was born in Gezira 1962, He admitted bit alhaj basic school and then studied in Al-Mailek Secondary school,Then he Travelled to Khartoum to study Drama in Sudan University of Science and Technology and Graduated on 1990 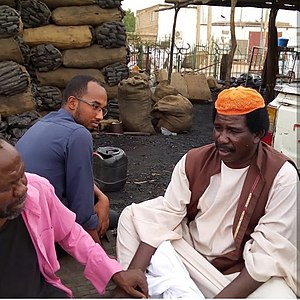 Kadasa worked as Head of the Department of Foreign Drama and purchased by Sudan TV, and then as Drama management manager (2013–2014), and Then director of technical operations of the Sudanese channel of drama, and He is currently a consultant for planning and programming at Media Tech[3]

Kadasa after graduation from Sudan University of Science and Technology He married Amna Yahya on 1994, then they had their first child Azzam on 1995, but Unfortunately Azzam died at age 1 on 1996 because of illness. Then after that God bless them and gifted them 7 children, 2 sons, and 5 daughters, include the boys there is nazar wickenze who followed his father steps and became an actor later on.
on 2015 Kadasa had an accident and hit by a car[4] and his left Thigh bone was broken.and He underwent a bone surgery and became able to walk again

try to view source (which written in Arabic) in English[edit]

Retrieved from "https://en.everybodywiki.com/index.php?title=Hassan_Kadasa&oldid=903833"
Hidden categories:
This page was last edited on 30 July 2020, at 11:59.
This page has been accessed 184 times.
Content is available under License CC BY-SA 3.0 unless otherwise noted.
Privacy policy
About EverybodyWiki Bios & Wiki
Disclaimers