Hawkeye is an upcoming American web television series created for Disney+ by Jonathan Igla, based on the Marvel Comics character of the same name. It is set in the Marvel Cinematic Universe (MCU), sharing continuity with the films of the franchise. The series is produced by Marvel Studios, with Igla serving as showrunner.

Jeremy Renner reprises his role as Clint Barton / Hawkeye from the film series. By September 2018, Marvel Studios was developing a number of limited series for Disney+, centered on "second tier" characters from the MCU films. Development of a Hawkeye series had begun by April 2019, with Renner attached. The series was officially announced that July.

Hawkeye is expected to be released in late 2021. 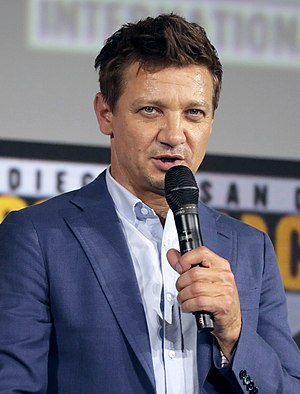 Renner promoting the series at the 2019 San Diego Comic-Con

In September 2018, it was reported that Marvel Studios was developing several limited series for Disney's streaming service, Disney+, to be centered on "second tier" characters from the Marvel Cinematic Universe films who had not and were unlikely to star in their own films,[2] such as Loki, Falcon, the Vision, Scarlet Witch, and Winter Soldier.[1] By April 2019, development of an adventure series starring Jeremy Renner as his MCU film character Clint Barton / Hawkeye had begun. The plot was expected to follow Barton as he bequeaths the mantle of Hawkeye to Kate Bishop. Marvel Studios President Kevin Feige was set to produce the limited series, which have six to eight episodes.[1] In July, Feige officially announced Hawkeye at San Diego Comic-Con.[3] A month later, Amy Berg revealed that Marvel's search for a showrunner for Hawkeye had come down to herself and a friend of hers, and that the friend had been hired for the role.[4][5] In September 2019, Jonathan Igla was announced as the series' showrunner.[6] Budgets for each episode were reported to be as much as $25 million.[7]

When officially announcing the series, Feige and Renner said the series would follow Barton as he teaches Bishop to be a "superhero without superpowers", and would explore more of Barton's time as the vigilante Ronin that was first shown in Avengers: Endgame (2019).[8]

With the series' official announcement in July 2019, Renner was confirmed to be starring in the series as Barton.[3] By early September 2019, Hailee Steinfeld had been offered the role of Kate Bishop.[9]

Hawkeye is expected to debut on Disney+ in late 2021.[3] Episodes will be released weekly rather than all at once.[10]

Retrieved from "https://en.everybodywiki.com/index.php?title=Hawkeye_(2021_TV_series)&oldid=903936"
Categories:
Hidden categories:
This page was last edited on 30 July 2020, at 12:51.
This page has been accessed 1,167 times.
Content is available under License CC BY-SA 3.0 unless otherwise noted.
Privacy policy
About EverybodyWiki Bios & Wiki
Disclaimers