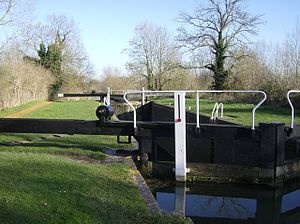 Heale's Lock is a lock on the Kennet and Avon Canal, between Thatcham and Woolhampton, Berkshire, England.

Heale's Lock was built between 1718 and 1723 under the supervision of the engineer John Hore of Newbury. The canal is administered by the Canal & River Trust. The lock has a rise/fall of 8 ft 11 in (2.72 m).,[1] and was originally a turf lock, being rebuilt as a conventional lock in the late 1980s.

Retrieved from "https://en.everybodywiki.com/index.php?title=Heale%27s_Lock&oldid=1620686"
Categories:
Hidden categories:
This page was last edited on 11 April 2021, at 21:20.
This page has been accessed 129 times.
Content is available under License CC BY-SA 3.0 unless otherwise noted.
Privacy policy
About EverybodyWiki Bios & Wiki
Disclaimers