"Honor" is the ninth episode and mid-season premiere of the eighth season of the post-apocalyptic horror television series The Walking Dead, which aired on AMC on February 25, 2018. The episode was written by Matthew Negrete and Channing Powell, and directed by Greg Nicotero. It is the final regular appearance of Chandler Riggs as Carl Grimes, who had been on the show since the first season and in turn also marks the departure of actor Jayson Warner Smith (Gavin) who was part of the recurring cast since previous season, because his character is killed by Morgan Jones (Lennie James) and Henry (Macsen Lintz).

Following Negan and the Saviors' assault on the communities of Alexandria and the Kingdom, Rick (Andrew Lincoln) and his allies deal with the aftermath of events. In a flashback, Carl (Chandler Riggs), having been bitten by a walker while trying to bring Siddiq (Avi Nash) to Alexandria, keeps his bite mark hidden, makes sure Siddiq finds quarters in the sewers below the community, spends time with his toddler sister Judith, and writes several letters to those he knew.

In the Kingdom, Gavin (Jayson Warner Smith) and the other Saviors of his group keep watch over Ezekiel (Khary Payton). Outside the community, Carol (Melissa McBride) leads the Kingdom survivors far enough away and instructs them to continue towards the house she used outside of the Kingdom for shelter, while she goes back to rescue Ezekiel. Henry (Macsen Lintz), who is trained in both firearm and melee combat and whose older brother Benjamin had been killed by a Savior, insists that he come along to assist, but Carol orders him to stay with the others.

Carol soon meets up with Morgan (Lennie James), who had escaped the Saviors' massacre of Rick's snipers watching the Sanctuary. However, Morgan has become bitter and once the two are inside, he becomes brutal in dispatching the Saviors. At one point during the mission, Morgan disembowels a Savior as Carol and a rescued Ezekiel watch. Gavin, the last Savior of the group left alive, flees and attempts to hide, but Morgan easily finds him. Morgan prepares to kill Gavin, but Carol senses that Morgan is conflicted and attempts to convince him to spare Gavin. A distressed Morgan balks, trying to decide what to do, when suddenly Gavin is stabbed through the neck from behind by Henry, who had followed Carol.

In the present, after Negan's attack, Rick and Michonne (Danai Gurira) regroup with all the other Alexandria survivors in the storm sewers and come to learn of Carl's impending death. They decide to wait until Negan's assault is over and then head off to Hilltop to regroup. Rick knows Carl will not survive the journey, and he and Michonne remain with Carl. Before leading the rest away, Daryl (Norman Reedus) commends Carl on their survival due to Carl's intent to stay out of the war with the Saviors and the preparations he had made. Carl and Rick spend much time discussing the past; Carl explains why he brought Siddiq here, and how he felt remorse for having killed a youth back during their time at the prison; Rick forgives him for these past transgressions.

As Rick and Michonne move Carl up to the church, Carl insists that Rick can become a better person; in his mind (shown in a dream sequence first seen in "Mercy"), Carl imagined his father in the future had become compassionate rather than vengeful, and devoted his time to raising their family and leading the Alexandria community. All survivors, including Negan, work together harmoniously to make Alexandria a thriving community in this dream. The next morning, Carl sends Rick and Michonne out of the church and shoots himself. Rick and Michonne prepare a burial site to lay Carl to rest. 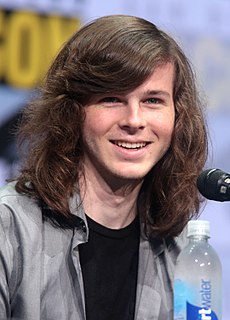 Chandler Riggs makes his final regular appearance as Carl Grimes in this episode.

The ending of the episode intersects between Carl saying his goodbyes to Rick and Michonne, and Morgan's struggle to kill Gavin with Carol and Ezekiel attempting to talk him down. Director Greg Nicotero saw these scenes in direct contrast with each other, and spent more time planning out how these two scenes would be merged. Nicotero saw Carl's and Morgan's struggles mirroring each other, and had shot Carl's scenes with him on one side of the frame, and Morgan's on the other, to represent this mirroring.[1]

The episode received positive reviews from critics. On Rotten Tomatoes, it holds an 81% with an average rating of 7.54 out of 10, based on 26 reviews. The site's consensus reads: "Focusing on the farewell of one of the series' original characters, "Honor" delivers an emotional mid-season premiere."[2]

The mid-season premiere drew a total viewership of 8.28 million with a 3.6 rating in adults aged 18–49. This was an increase in viewership from the mid-season finale, which had 7.89 million viewers.[3]

Share
Retrieved from "https://en.everybodywiki.com/index.php?title=Honor_(The_Walking_Dead)&oldid=1151522"
Categories:
Hidden categories:
This page was last edited on 2 December 2020, at 03:49.
Content is available under License CC BY-SA 3.0 unless otherwise noted.
This page has been accessed 452 times.
Privacy policy
About EverybodyWiki Bios & Wiki
Disclaimers