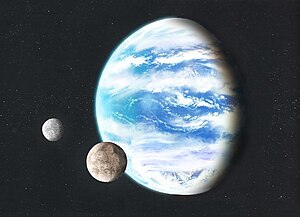 A hycean planet − from the words hydrogen and ocean[1] − is a hypothetical type of habitable planet described as a hot, water-covered planet with a hydrogen-rich atmosphere that is possibly capable of harboring life.[2][3] According to researchers, hycean planets, based on planet densities, may include rocky super-earths as well as mini-Neptunes (such as K2-18b and TOI-1231 b),[1][3] and, as a result, are expected to be numerous in the exoplanet population.[2]

Hycean planets can be "significantly larger compared to previous considerations for habitable planets, with radii as large as 2.6 R⊕ (2.3 R⊕) for a mass of 10 M⊕ (5 M⊕)".[2] Also, the habitable zone (HZ) of such planets may be "significantly wider than the terrestrial-like HZ". The related planetary equilibrium temperature may be as high as about 500 K (227 °C; 440 °F) "for late M dwarfs".[2]

Further, tidally locked planets may be "Dark Hycean" worlds ("habitable conditions only on their permanent nightsides") or "Cold Hycean" worlds (involving "negligible irradiation").[2] Hycean planets may soon be studied for biosignatures by terrestrial telescopes as well as space telescopes, such as the James Webb Space Telescope (JWST) scheduled to be launched later in 2021.[2]

The notion of a hycean planet was first presented in August 2021 by astronomers at the Institute of Astronomy, University of Cambridge, based on studies involving planet atmospheres, densities and related properties (masses, radii and temperatures), including potential habitability, as well as habitable zones related to host stars, and the ability to detect biosignatures in such worlds.[2]

Others articles of the Topics Astronomy AND Outer space : V838 Monocerotis, List of largest stars, Timeline of the far future

Share
Retrieved from "https://en.everybodywiki.com/index.php?title=Hycean_planet&oldid=2176754"
Categories:
Hidden categories:
This page was last edited on 5 December 2021, at 16:34.
Content is available under License CC BY-SA 3.0 unless otherwise noted.
This page has been accessed 293 times.
Privacy policy
About EverybodyWiki Bios & Wiki
Disclaimers