Imam Hassan Asgari village is one of many villages near Abadan city in Khozestan province. This village is located 13.2 kilometers away from Abadan, on the Abadan-ArvandKenar route. The first inhabitants of the village are people who emigrated from Iraq due to bad living conditions and chose that location because it had access to water and it met the conditions for farming. the village has a liner organization and is formed by the Arvand river. There are creeks perpendicular to the river that are used to water the farmland and gardens with the help of the tide, and Passages have been formed Parallel to the creeks. The village’s current population is estimated 1,480 people whereas multiple families live together which includes 194 families. Imam Hassan Asgari village was one of many villages that was damaged during the Iran-Iraq War and it’s been repaired and reconstructed since 1982 by Abadan Housing Foundation.

The inhabitants of this village are immigrants that came from Iraq in order to find better life condition, are Arabs who chose this place for living and farming due to fertility of the soil and its direct access to water. This village is located by the Arvand River and is one of the many linear villages. The road that runs through this village, separates it into eastern and western parts. In the western part there are housings by the river, and the eastern part is mostly consisted of farmlands.(Location on map)

Map of the village

The plain nature of the village has created a great opportunity for the villagers in farming since the profession of the villagers is gardening, and generally palm. Barhi date is the most harvested type of date and its favored because of its high price compared to other types of date. Villagers also harvest a variety of other dates such as Samra date and Sayeri date. Because of the special conditions of planting palm trees(they have to be planted 6 meters apart), villagers planted other trees between the palm trees like orange and apple trees to use the land more efficiently in the past. But after the war, because of water salinity and drought, planting trees other than palms was not possible.  Also the watering of the farmlands used to be from creeks that the villagers dug, or from the tide of the river, but nowadays, because of the drop in the water level and salinity of water, the mentioned methods don’t suffice and the villagers have to use water pumps and mechanical appliances.

The villages housing are consisted of two parts, prior and post war. Village houses built before the war were made of thatch and were the home of multiple families that were relatives. There were a number of rooms around a large yard where each room belonged to a single family and the number of rooms were equal to the number of families, however, the houses built after the war were different. For more strength, the houses were built with bricks and stronger materials, and each house belonged to a single family. Post-war houses were also built as big as possible so that the villagers would have enough space for livestock, farming equipment, and room for stocking and packing date. 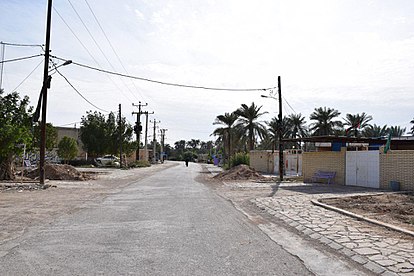 Rustic houses are houses that have the most in common with the rural texture and bedding and are built close to nature. This type of houses were constructed prior to the war and are no longer inhabited.

Imam Hassan Asgari village, or also known as Shalheie Imam Hassan, is in fact an island village and it is also named because of it, as Shalhe means “island” in Arabic. The village is formed along the edge of the Arvand River and thus is of a linear organization. The village can be separated into 2 parts, one part that is closer to the river, which is residential houses are built near the water, and the other part that is covered by palm gardens. This village is located between Savamer and Naghsh Heir villages and because of the small distance between them, these three villages have Social interactions and help each other in different tasks.

Retrieved from "https://en.everybodywiki.com/index.php?title=Imam_Hassan_Asgari_Village&oldid=907075"
Category:
Hidden categories:
This page was last edited on 31 July 2020, at 07:27.
This page has been accessed 101 times.
Content is available under License CC BY-SA 3.0 unless otherwise noted.
Privacy policy
About EverybodyWiki Bios & Wiki
Disclaimers
Mobile view